Back in July I wrote about the time of year when the beautiful, bright leaves of the beech trees light up the forest and make your shutter finger itch. If there is a time of the year that is as important for photographers here in Denmark as those weeks in May, it would be October and November when those same trees explode in orange and yellow colors.

Fortunately, I recently had the opportunity to visit the ultimate location in the area for fall photography, the stunning nature resort Dyrehaven just 30 minutes from downtown Copenhagen. Dyrehaven is a combination of forest and open plain. It is not a huge area. You can walk through it in an hour or so (unless you stop every two minutes to take pictures, in which case it takes three), but due to some kind of government or city decree, no one is allowed to build houses that stick up above the tree line when you stand on the big hill in the center. In other words, it feels like an isolated natural reserve, and it's easy to forget how close you are to the city.

The only problem on this day was the light. The sky was gray and dreary, but the clouds were still well-defined and therefore things could have been much worse. I certainly preferred this to a clear blue sky.

First we have the entrance gate to the area. It is in itself a beautiful structure, and with the fall leaves framing it, it just lends itself to photography. 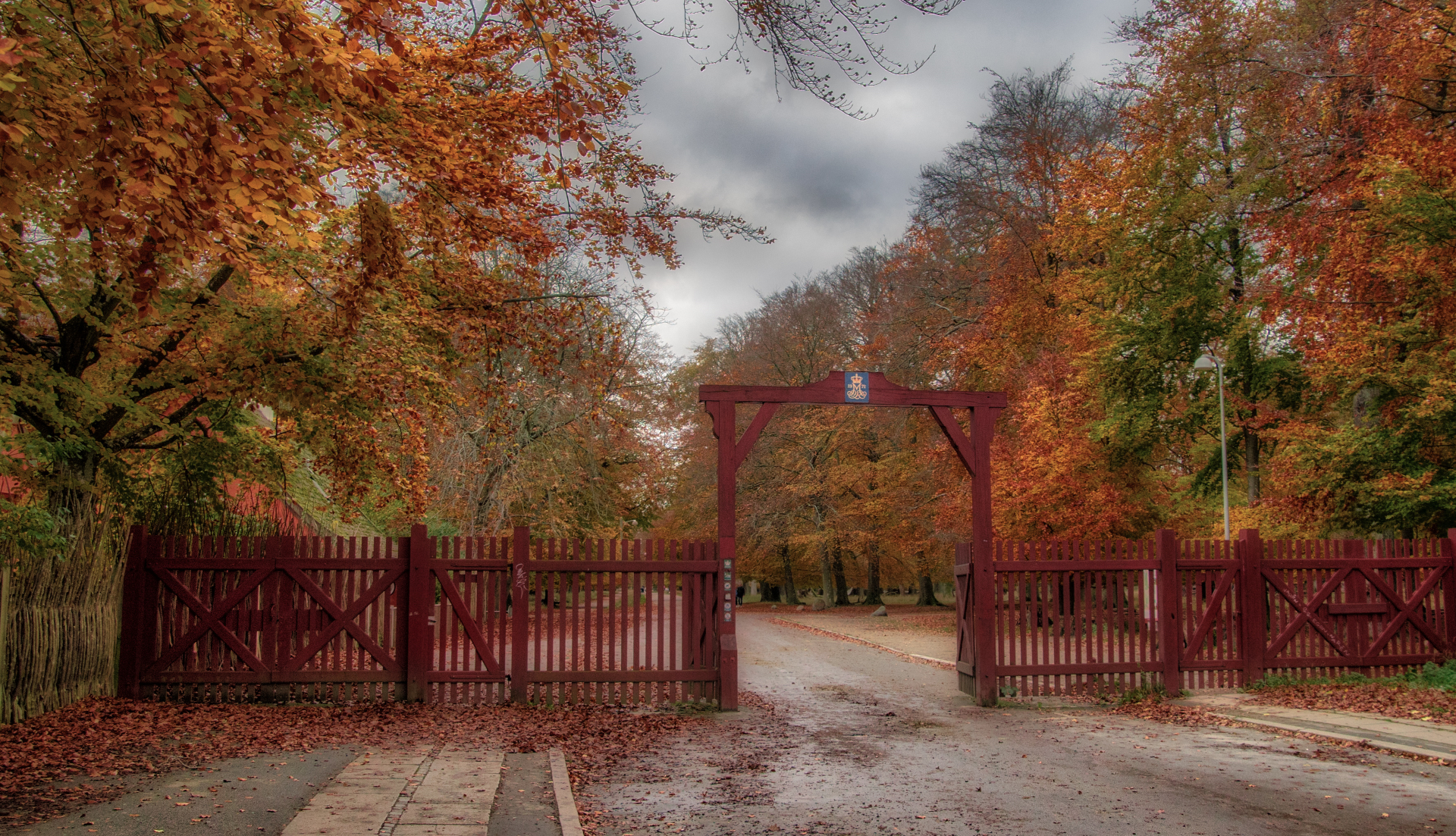 The next image is the only one in the bunch taken with my cell phone. I always snap a few images with my cell phone when I'm on a photo shoot. just to have some for my Instagram and just because cell phone images have a different flavor that sometimes make a nice addition to my collection, as was the case with this one. None of my shots taken with my real camera captured the way the leaves formed a low ceiling over the leaf-covered forest floor quite as well. 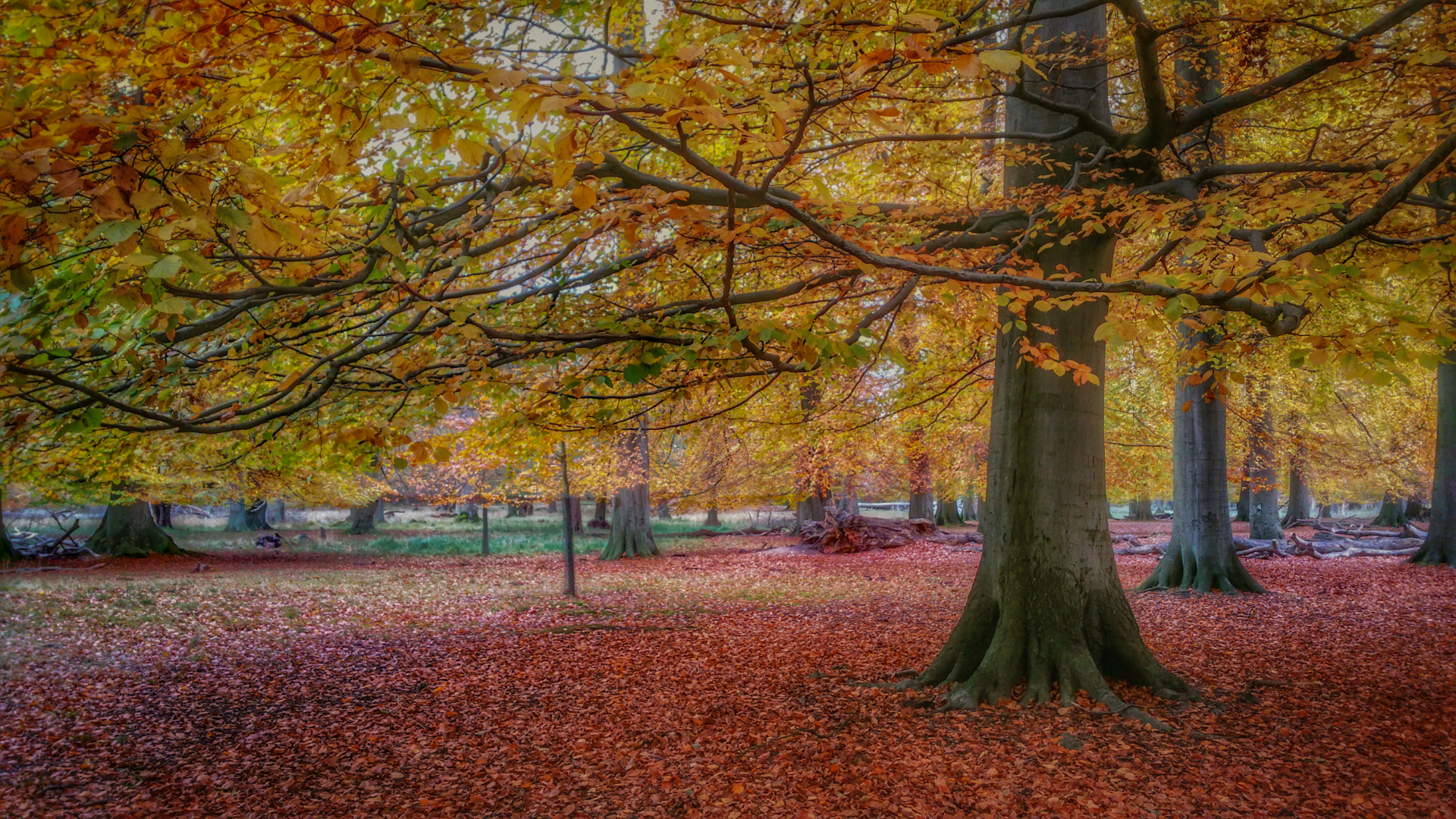 Moving on, the forest was replaced by more open landscape interspersed with awesome old orange-leafed trees that begged to be photographed. I especially liked this old oak tree - or whatever it is. And no, this would not have worked with a clear blue sky as the background. Old, crooked trees require gloomy, gray clouds. 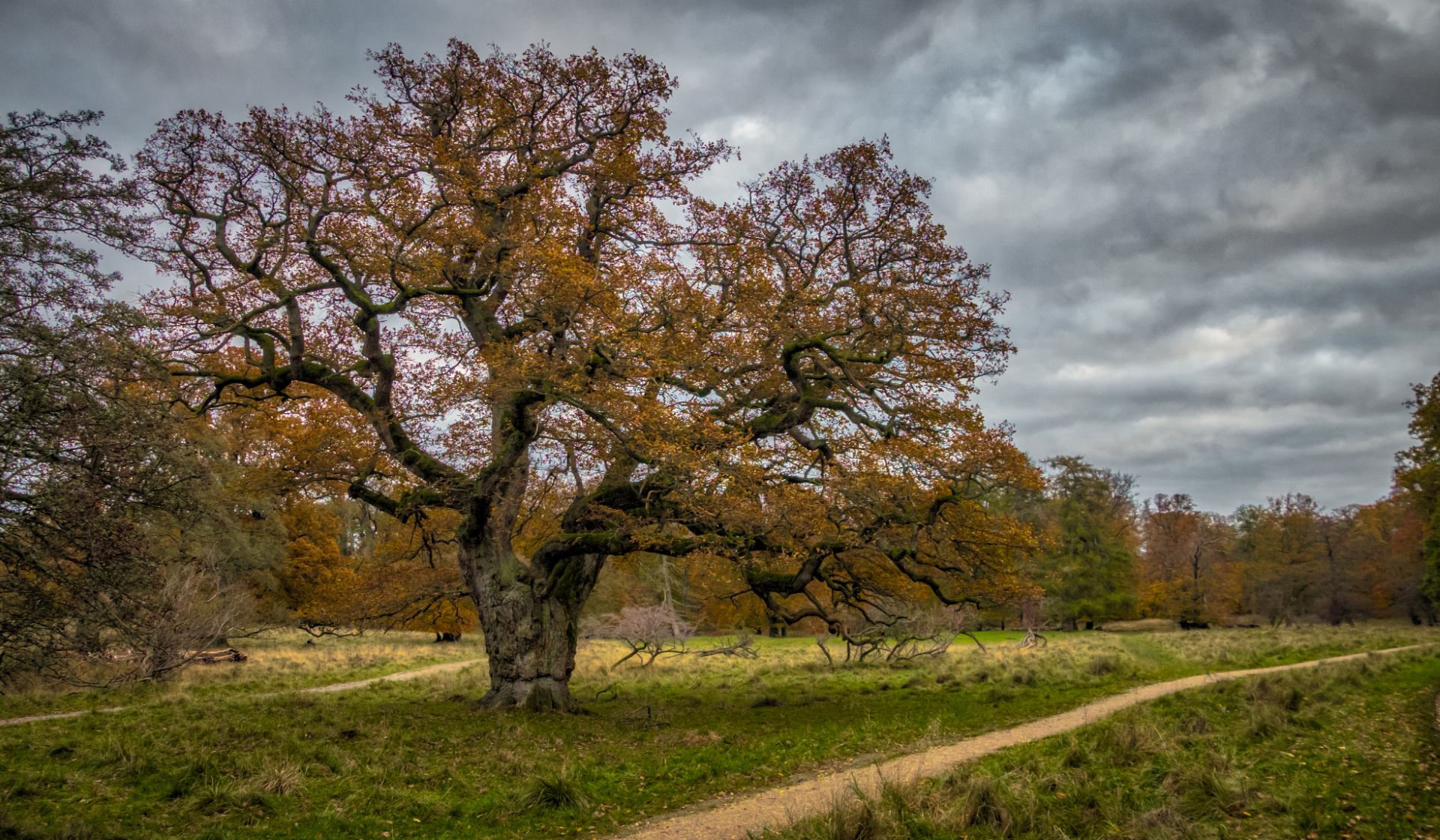 As I continued up the hill in the center of Dyrehaven, I came across the pond shown below with a swan couple floating around. At this point the sun was setting and the sky had started to break up a little bit, showing some blue and purple colors. I spent quite some time there, shooting the pond from all kinds of angles. And waiting for the swans to not be grooming their feathers and not sticking their heads into the water looking for food. They do that a lot, and it's not how you want to see swans in photos. You want them with those beautiful, curved necks held high or, as in this case, with their wings spread in an angel pose. 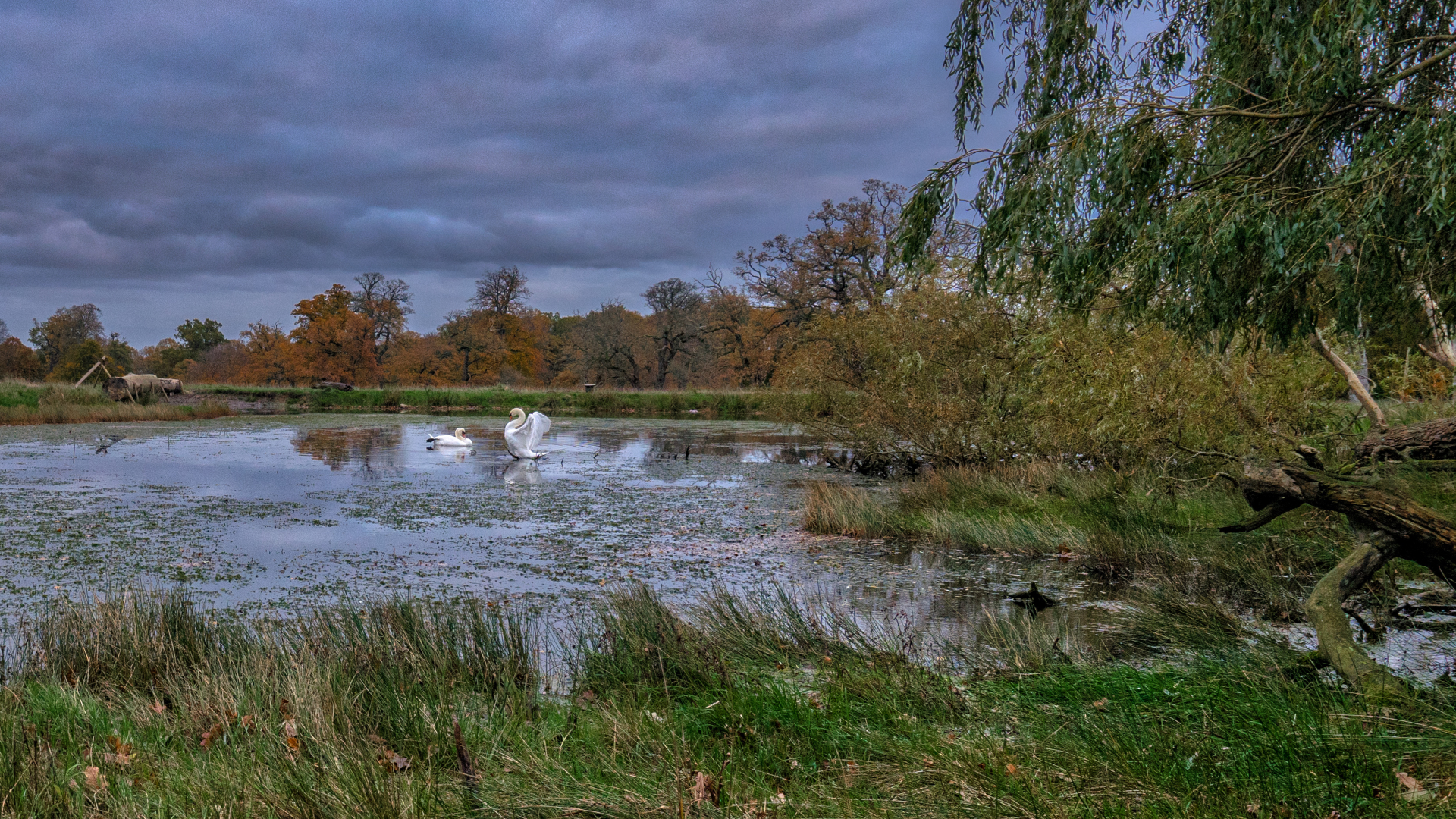 At the very top of the hill, there is a tiny castle called the Hermitage Hunting Lodge or, in Danish, Eremitageslottet. Dyrehaven is also referred to as the Hermitage and used to be a royal hunting ground. Every year a horse race with riders in traditional red hunting coats  takes place. They don't hunt anything other than a victory in the race, although more modern hunting (thankfully without horses or dog packs) does happen in order to control the number of game. 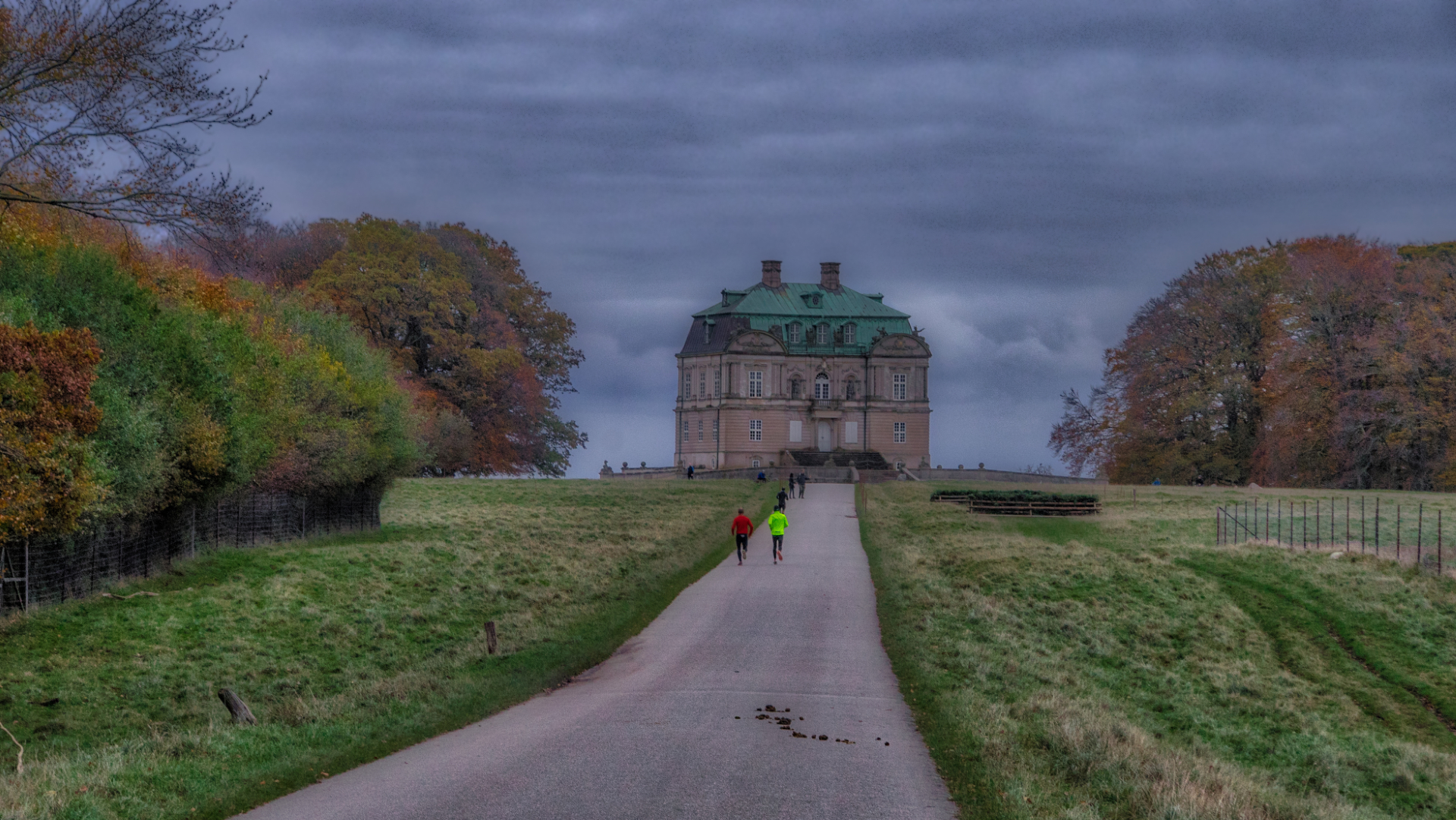 That brings me to one of the absolute coolest features of Dyrehaven: deer. The place is full of them, in all shapes and sizes. You cannot avoid seeing them if you tried. I had taken a few pictures of a herd of deer earlier in the day, but it wasn't until I was headed for the park exit that I got close enough for something like the image shown below. Unfortunately, it was getting dark at this point, forcing me to use an extremely high ISO of 6000+ in order to get any sharpness at all. Still, several images, including this one, turned out quite well, which speaks for my Sony camera's noise-reduction capabilities... as well as Lightroom's. 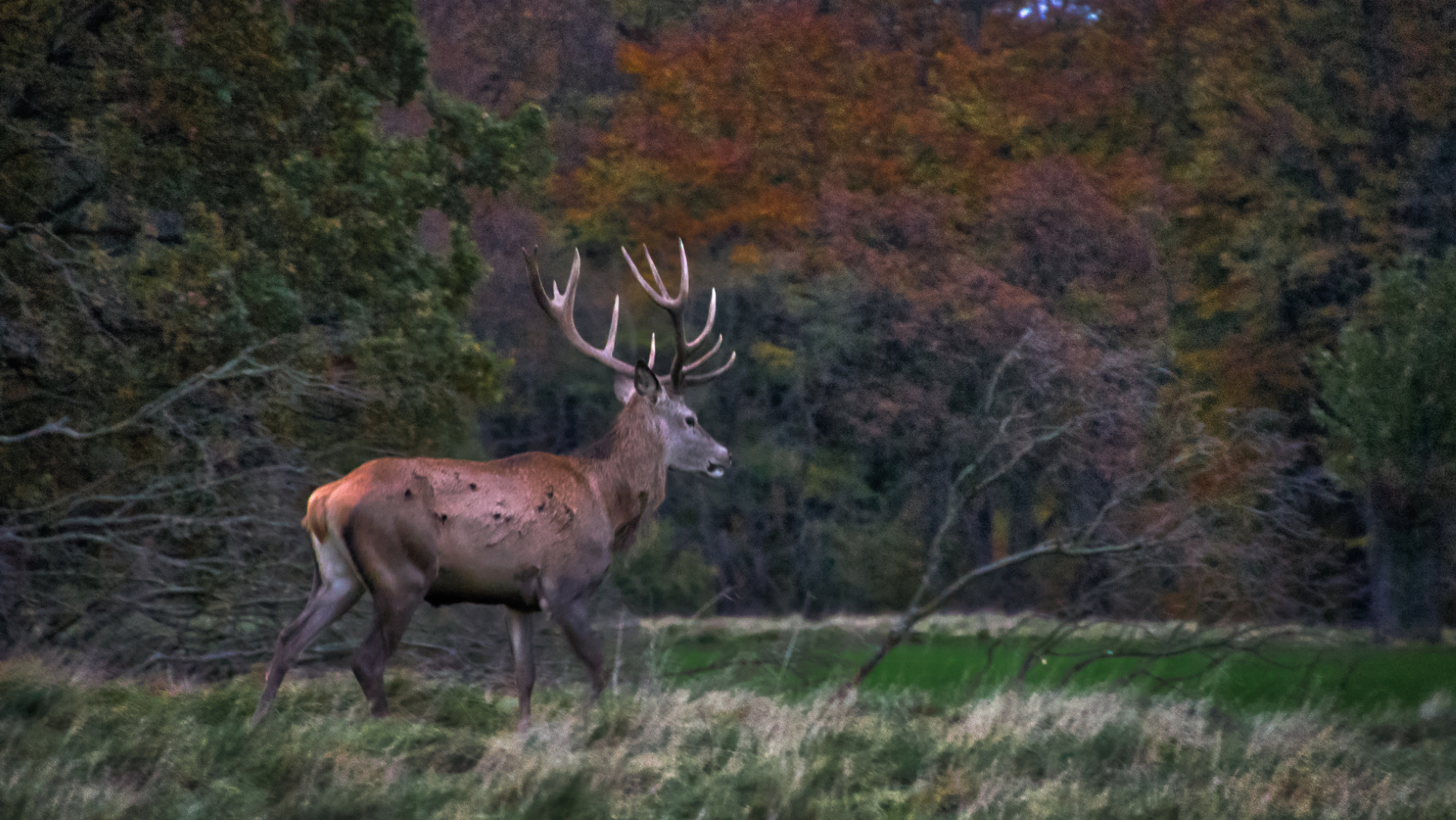 Darkness had now fallen and it was time to head out. I'd enjoyed several hours of the most exquisite nature and landscape you will find that close to a big city. Given that it was a week day and late in the year, I felt like it had been just me and the deer there. I relished in the peace and quiet and closeness to nature, which really is what it's all about.

On the way back to the train station, 30 drunken teenagers boarded the bus and tore me out of my zen. Although I was never a drunken teenager myself, I can't say at that age I had a whole lot more appreciation for the original, natural world than these partying youngsters seemed to have. I don't know exactly when it changed for me, but I'm glad it did and that I have photography to help me suck it in and bring it home for further absorption.