Considering how few people actually see my photography - most of my images are only ever seen by me - I take it very seriously. I am finding my niche more and more in Danish landscape, and forest areas in particular. I love the forest. I grew up a few hundred meters from a forest and moved to my current home partly due to its vicinity to forest land.

But forest can be a challenging subject. Not for lack of compositions. But in order to take good forest pictures, you need to literally get off the beaten path and find the spots that no one ever sees. That is not always easy.

The other night I went back to the Strødam nature enclosure. I have written about it in the past, before I really knew what it was. I just knew there was a fence around it and signs telling you to stay out. Since then I have learned that it's an area owned by the government used for nature research. They are basically letting an area of forest, lakes, and meadows take care of itself without much human disturbance. There are tons of birds and deer, and a herd of more or less free-roaming cows. In other words, a paradise for nature and landscape photographers. Except, photographers are not allowed to go there.

Well, back in February part of the fence around the area was suddenly gone. I had a feeling they were just replacing it, because it was old and worn out, and it turned out I was right. But for a few weeks in February I could at least pretend I didn't know that I wasn't supposed to go in, so I did. I have in fact shown you a few pictures from those excursions without mentioning where they were taken or the circumstances. But anyway, as much as I love those gray, dreary images of the winter forest, I felt I had to return to see what it looked like in the spring.

So, I shouldered my camera bag, saddled my bicycle, and rode out to the area a couple of hours before sunset. I knew there was an entrance that did not have a gate. A discreet sign tells you to please stay out, but that's all, and on this evening I happened to look the other way as I passed it. Or at least, that was going to be my story if anyone asked.

A few bigger paths traverse the area, so I was able to ride my bicycle as I started my penetration into the forbidden land. I had not gone far before I heard a loud rustling sound from the brush. I couldn't see what caused the sound, but moments later two deer appeared in a meadow next to the path. One of them quickly dispersed into the woods, but the other one stood there and watched me long enough for me to raise my camera and grab a picture. Unfortunately, I had the 16-35 mm lens on, so I couldn't really zoom in on it much, but I still like the result. 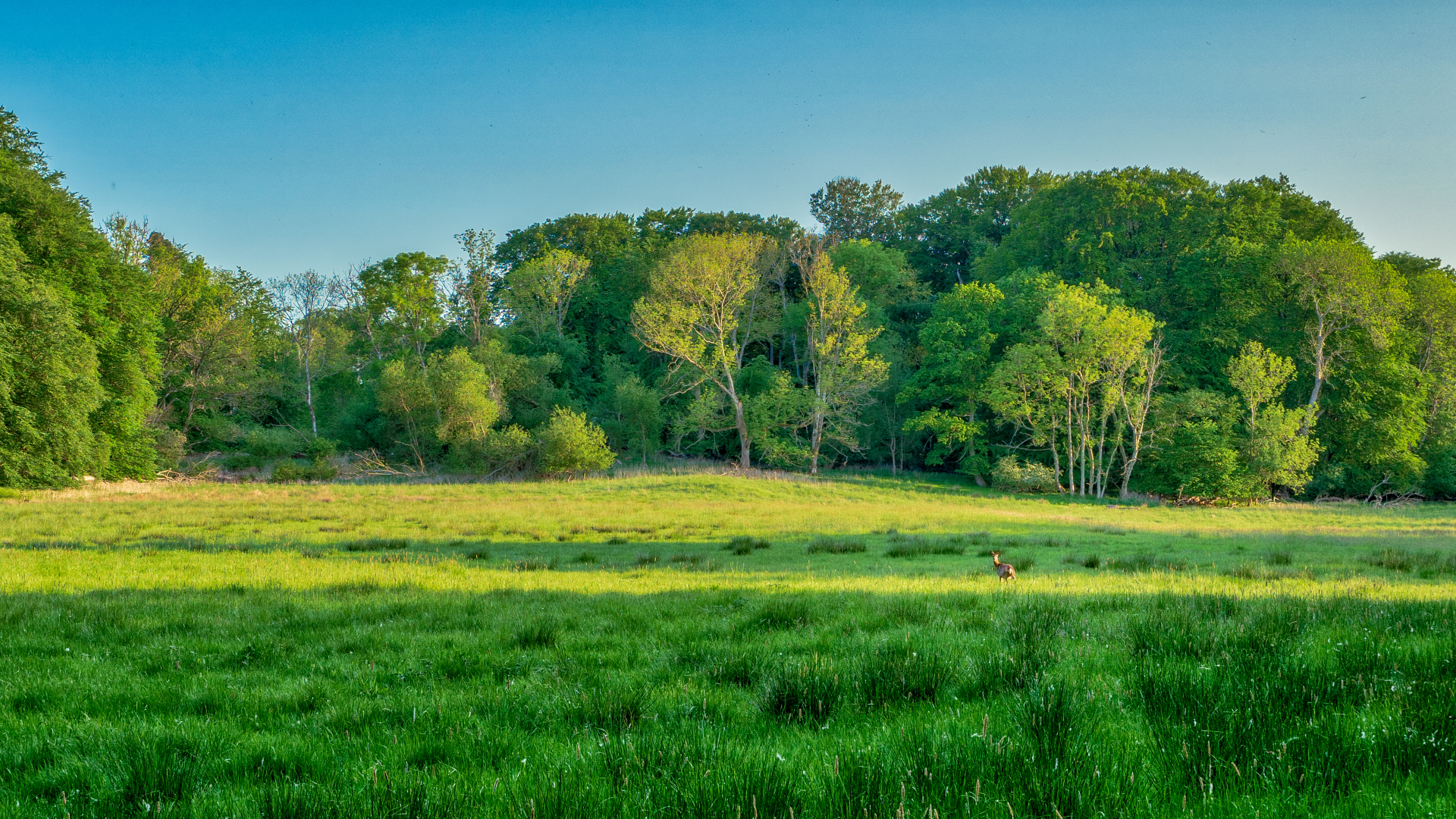 For the next hour or so I crisscrossed the area, setting up my tripod wherever a sunbeam flooded the forest floor, a branch reached out, a broken tree had been left to rot, or whatever else constituted a composition in my all too receptive brain. That is my strength and my weakness as a photographer. I see compositions everywhere, and that leads to too many pictures and sometimes rushed execution, because I have to go to the next spot and the next spot and the next. Still, I got away with this string of photos that have passed my own quality control. 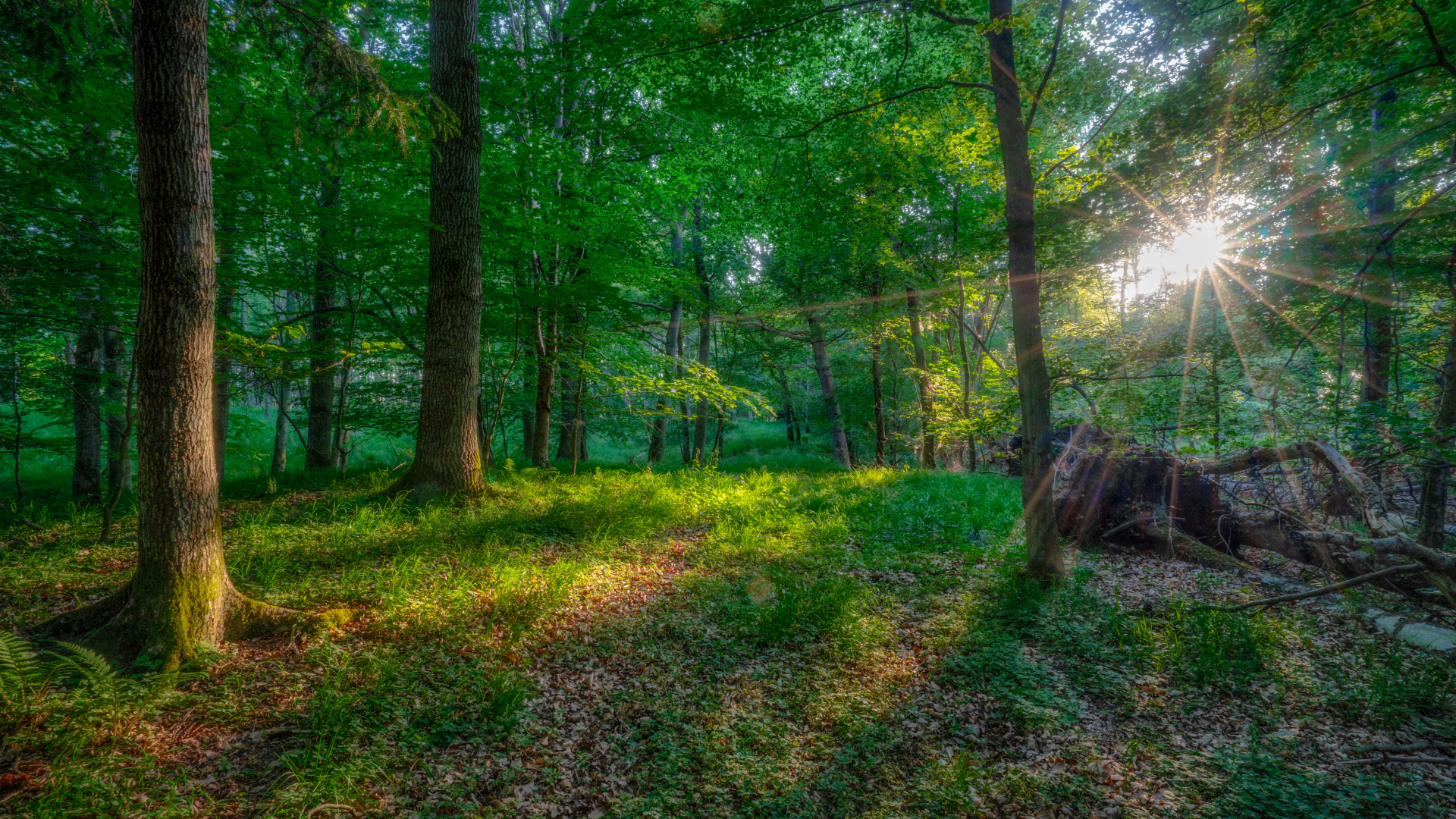 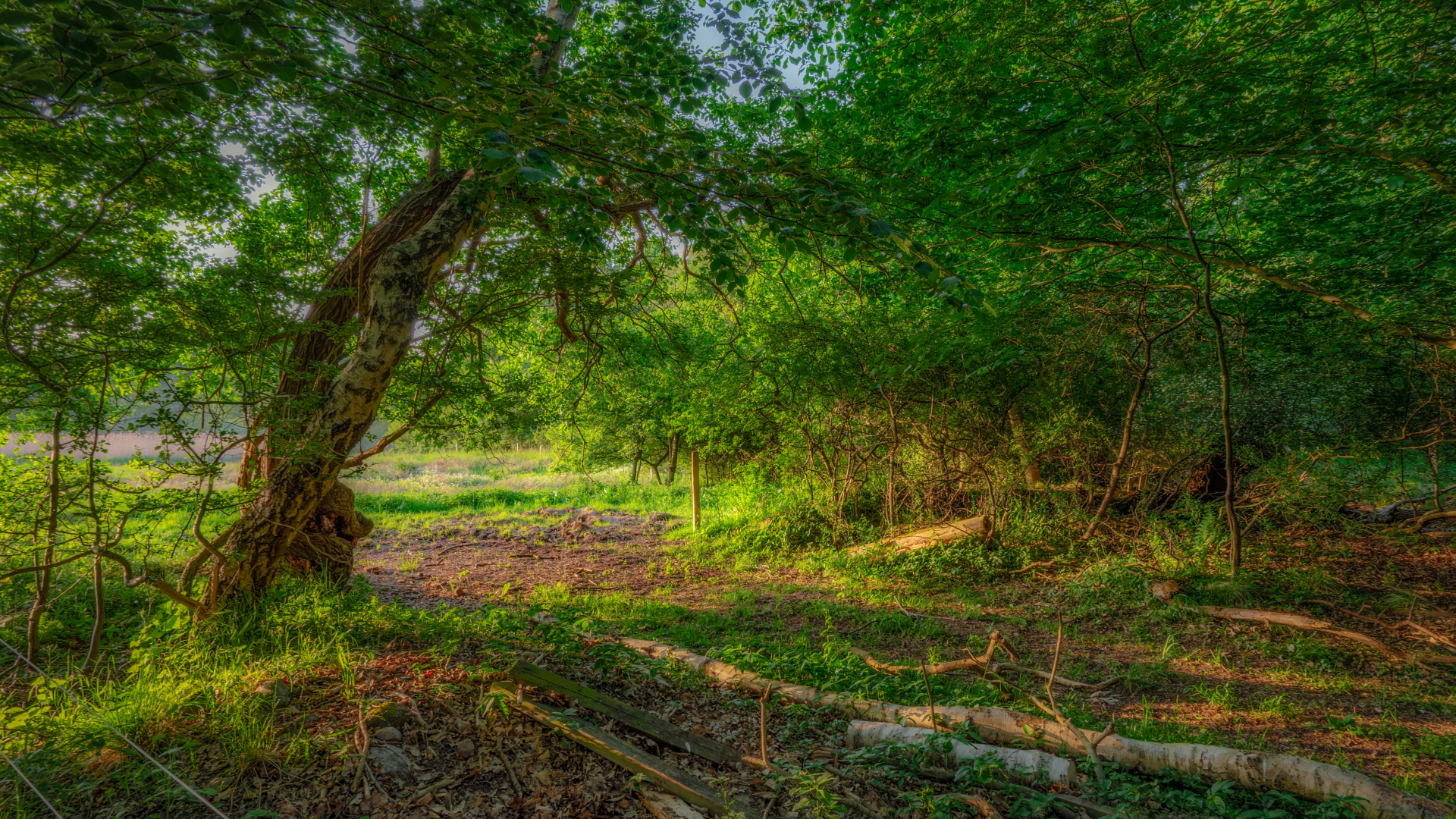 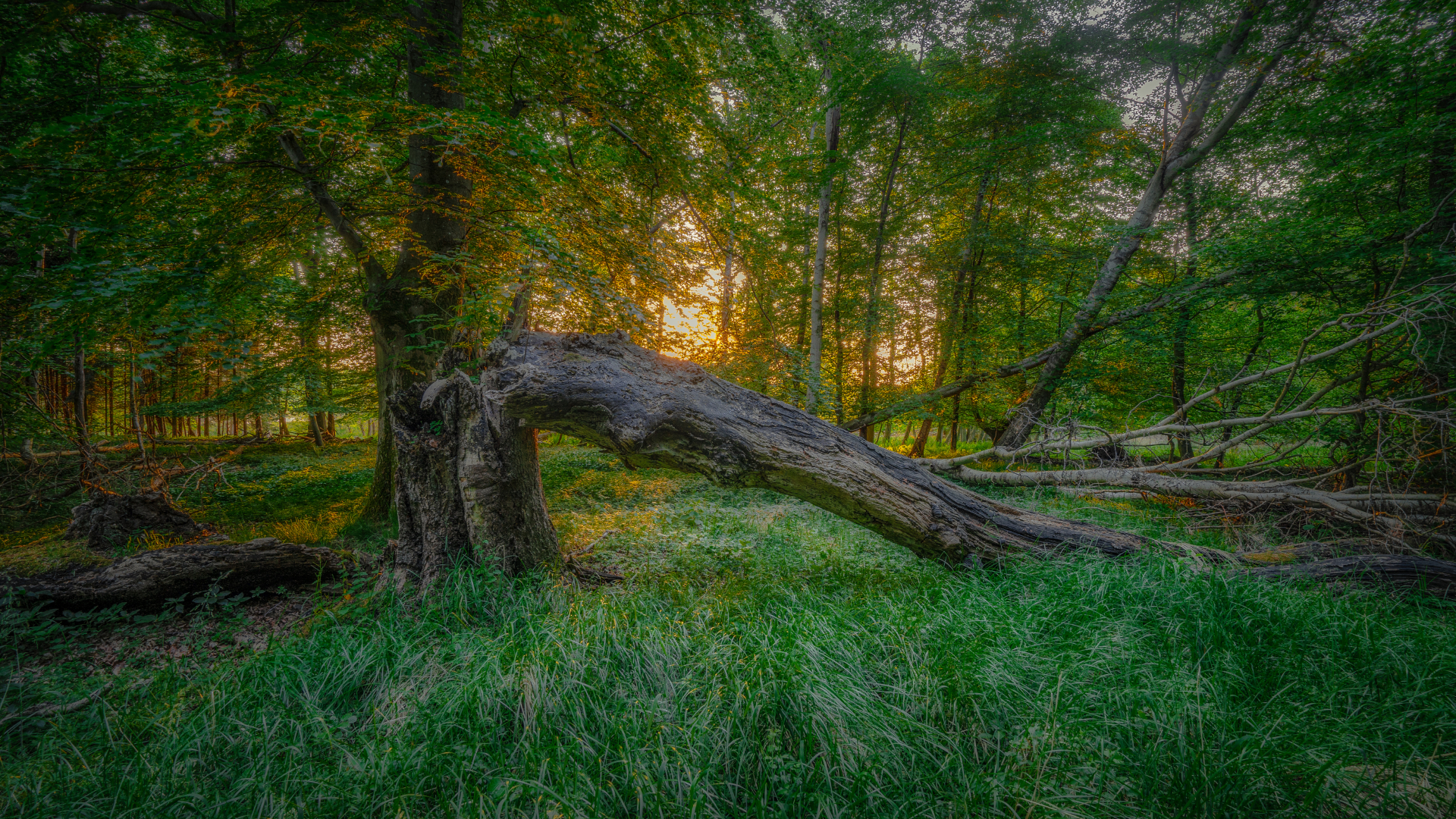 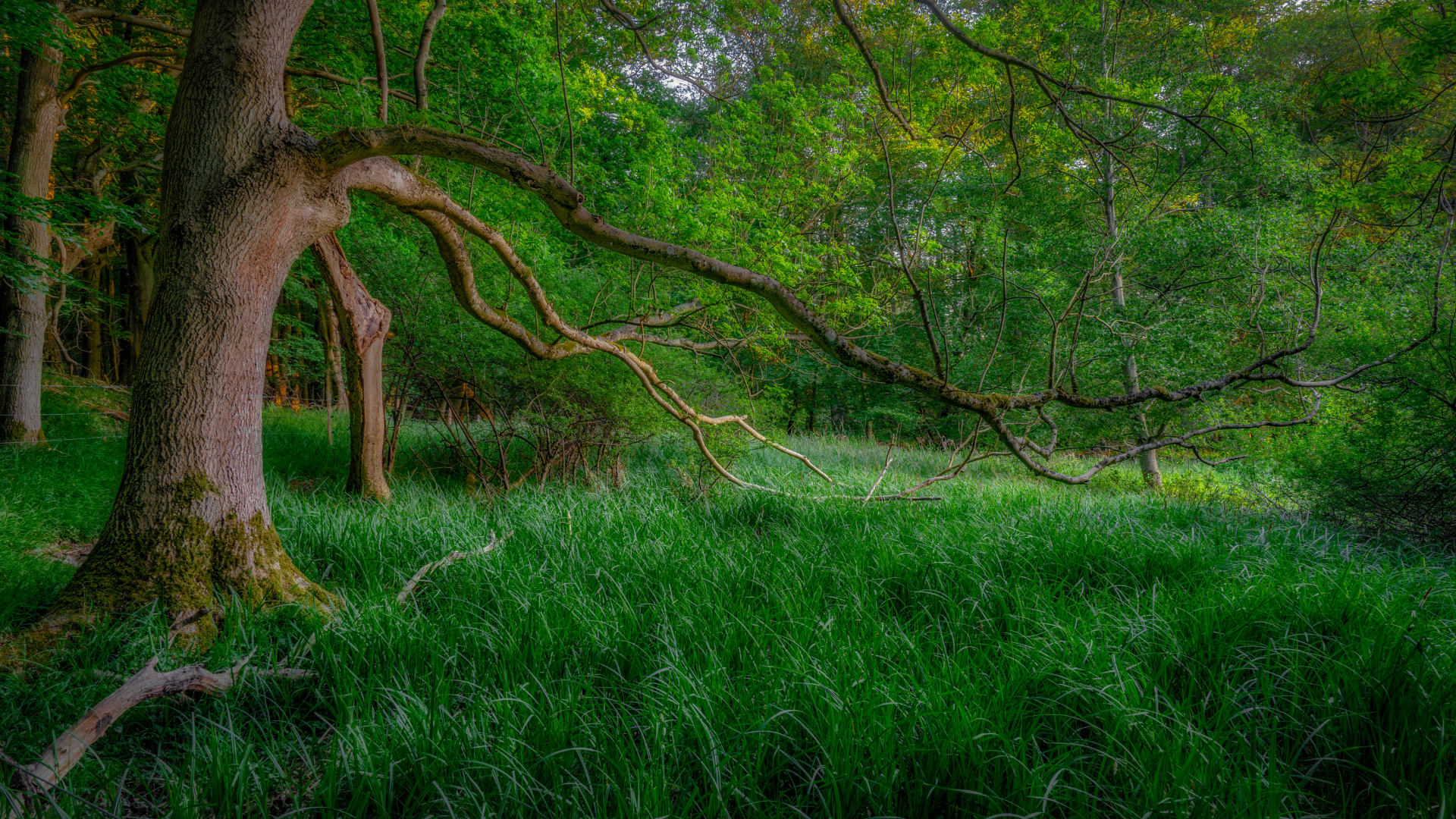 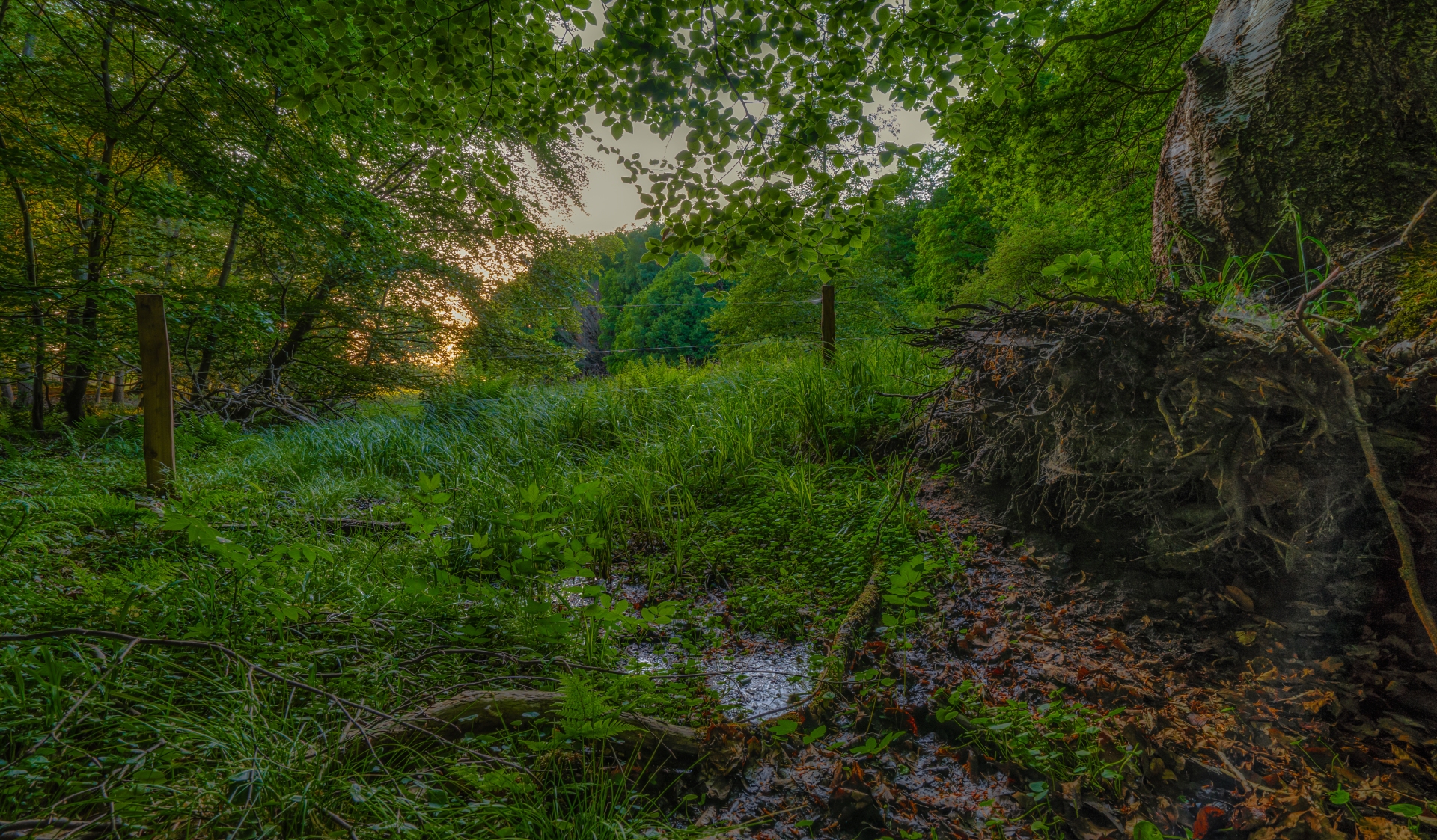 Along the way I had suddenly heard a dog bark not very far away. The barking came closer, and in an instant I went from being an amateur photographer enjoying nature to Harrison Ford in The Fugitive. I was sure some nature police squad had spotted me and was trying to hunt me down for trespassing. I hid behind a tree and cursed myself for having left my bicycle out in the open.

In the end, the dog moved further away, and it had probably just been out for an evening walk with its human. Still, I sighed a breath of relief and went on my way.

By now it was starting to grow dark, but just as I was considering packing up and heading back home, I saw movement through the trees ahead of me. I walked closer and approached the edge of the forest, and that's when I realized what was going on. It was the resident cow herd that was frolicking in the cool evening air. In other words, picture opportunity!

I snuck closer to the herd, which of course, they immediately spotted, un-stealthy as I am. So instead of posing for me, the cows took off, not walking lazily away, but at a gallop, and positioned themselves on a nearby ridge. They were staring at me, and I was staring back, and lo and behold, the leader cow started to move back down the hill towards me. At this point it should be mentioned that there was a fence between me and the herd. Still, I started to get a little apprehensive, because it didn't look like a very solid fence. Soon the entire herd was moving back towards me, and the leader cow did not look particularly friendly. Now,  I have not heard of killer cows in Denmark, but the whole situation was starting to seem a little dicey.

Still, I kept snapping away and kept my head cool enough to increase the ISO and keep the the exposure at a decent 1/50 seconds, and here's the result of my efforts: possibly the best cow picture in my collection. 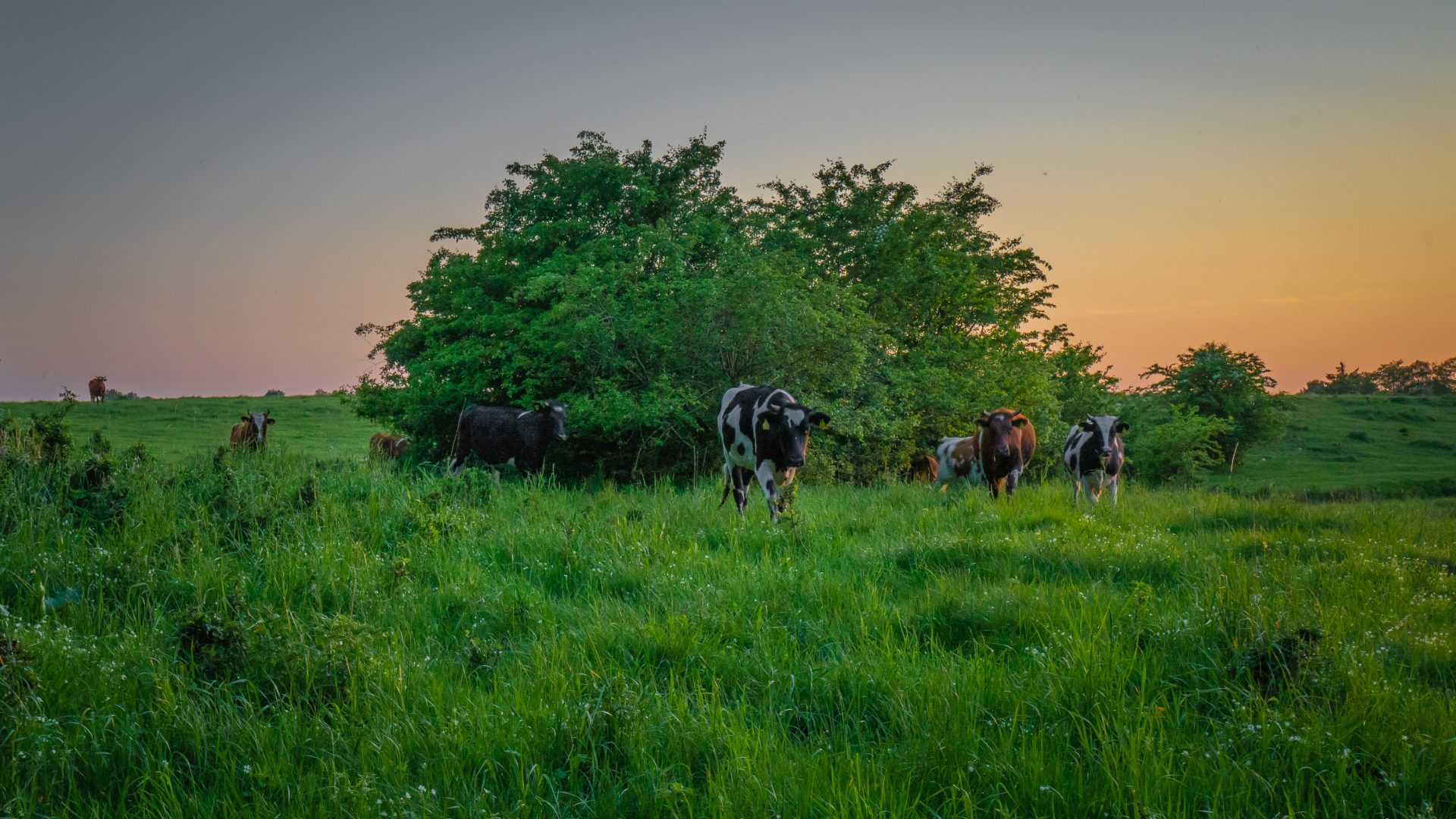 Now, my wife always tells me to be careful whenever I head out on a photo mission, and I always say I will be, so I figured now was the time to live up to my word and begin my retreat in good order. So I shouldered my tripod and left the cows behind. Being cows, they probably never intended to attack me, but were merely curious and hoping for a bite to eat other than their usual grass. That wasn't going to happen as it was now time to pack up my gear and head home...

As soon as the realization hit me that I did not have my camera bag with me, a panic started to spread through my body. Where did I last see it? I had no idea. Hopefully, I had just left it with my bicycle back on the path. I stumbled back through the underbrush, getting several nettle stings along the way. And no, there was no sign of my bag anywhere near my bicycle.

There was no way around it. I had to backtrack to all the locations I had been at, which by this time amounted to half a dozen, several of which I wasn't even sure if I could find again, having walked through semi-dense forest to get to them.

As I pedaled back to the previous spot, and the one before that, thoughts of losing a bag containing maybe $2000 worth of camera equipment was very present in my mind... or having to come back early the next morning to continue the search... or worse, having to contact the nature enclosure administration and confess my sin of having entered the area without permission, but "pretty please, would you return my camera bag if you find it, thank you..."

That's when I suddenly remembered when I had last seen it. At one of my last stops, I had changed lenses. That's where I must have left the bag on the ground. And sure enough, I managed to make it back to the spot and found the bag exactly where I left it.

My legs burning from nettle stings and bloody scratches up and down my calves from scrambling through the brush, but relieved as hell, I was finally ready to head for the exit.

But my trouble had only just started. I wanted to leave the area through the southern edge. I had done that without problem  during an earlier visit, because I had found a spot where two fences didn't quite overlap and thereby left a hole big enough for a person to walk through. After finding the spot, which in itself was a challenge since no paths led to it, I realized that the missing overlap was no more.

I had to climb over the fence - with my bicycle.

The bicycle was the easy part. The fence was no taller than I was able to lift the it across. Getting my own 94 kilos to the other side was harder. There was nothing to really step on to get a good take-off, plus the fence was actually a little bit electric. I had visions of myself missing my leap and getting stuck straddling the fence and having my finer parts fried.

But it had to be done. I put my foot on the bottom string of the fence and leaped. The string broke and for a fraction of a second my worst fear was coming true. But through sheer adrenalin and will power I exerted my last strength and landed safely on the other side.

Almost overcome with exhaustion, I pulled my bicycle through the last shrubbery, tearing my shirt and adding a few more scratches to my legs. But I was out... I was finally out. I had been hunted by dogs, attacked by killer cows, had my legs shredded by thorns and nettles, almost lost most of my camera equipment, and been forced to cross an electric fence, but I was alive. And I had a memory card full of what I hoped was a bunch of outstanding images.

Back on the bicycle path, I found that the chain had fallen off my bike. I didn't care. I put it back on and headed home. 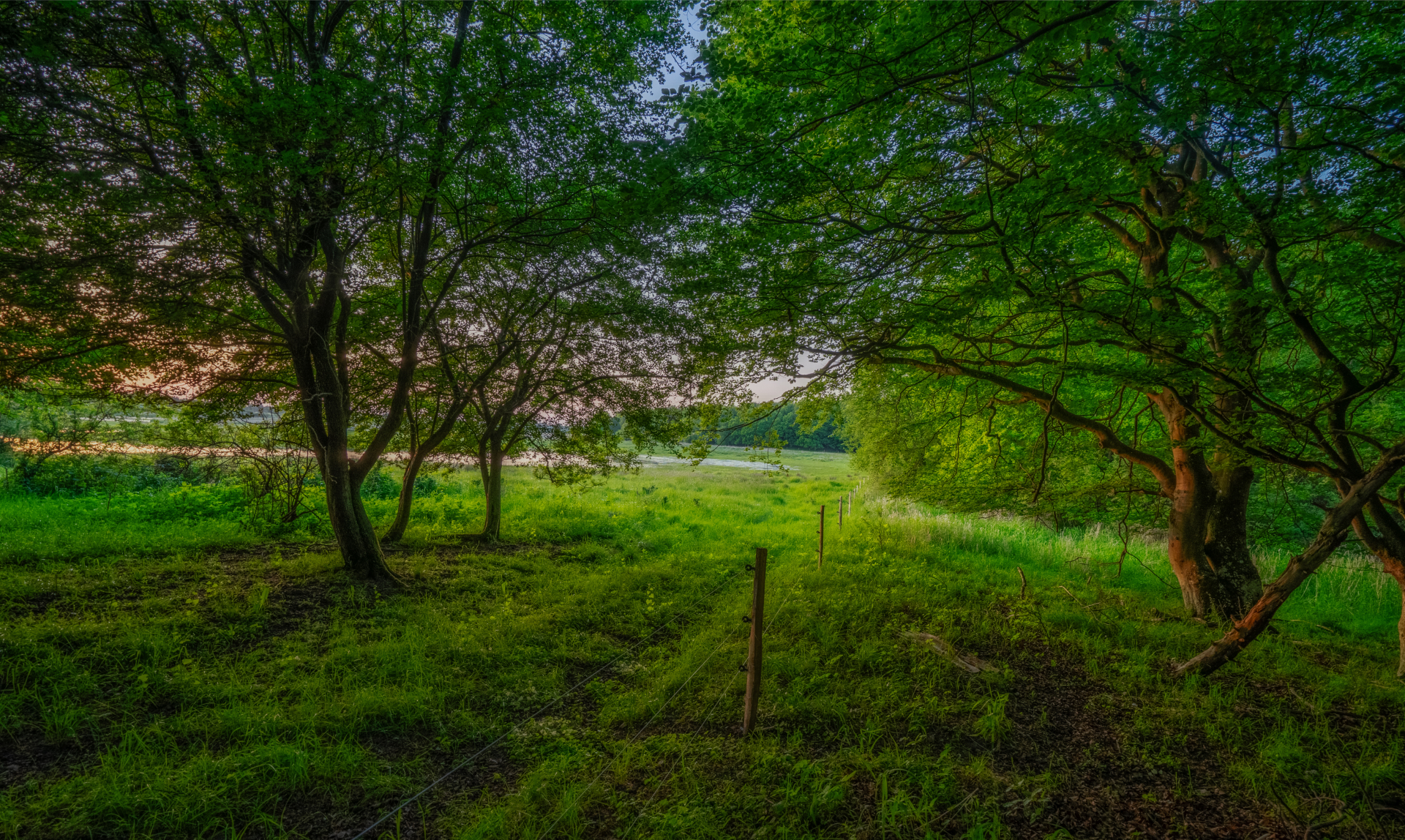