Every time I upgrade my camera equipment or achieve some new insight into photography, I joke to my wife that now I have to go back to every interesting place we've ever been and re-shoot all my photos.

Well, last month I got the chance to go back to a place we have been to several times before, but which I never quite conquered photography-wise: Oslo, Norway. Each time we had been there in the past, we'd taken the Copenhagen-Oslo ferry, which is a 16-hour voyage advertised as a mini-cruise. This time was no exception. I love this form of traveling. You can walk around the ship, eat great food, watch the ocean, chill in your cabin, and just relax, knowing that you are completely off the grid out there in the middle of the ocean. When you arrive in Oslo, you have 6-7 hours to explore the city before going back on the ship for the return voyage.

Now, the purpose of this trip was relaxing, first and foremost - not taking pictures. But of course, there's nothing wrong with bringing your camera just in case some good opportunities should arise. And they did... Of course they did. In fact, we hadn't even left the harbor in Copenhagen before I started snapping away from the stern of the ship and captured some of the surrounding architecture. 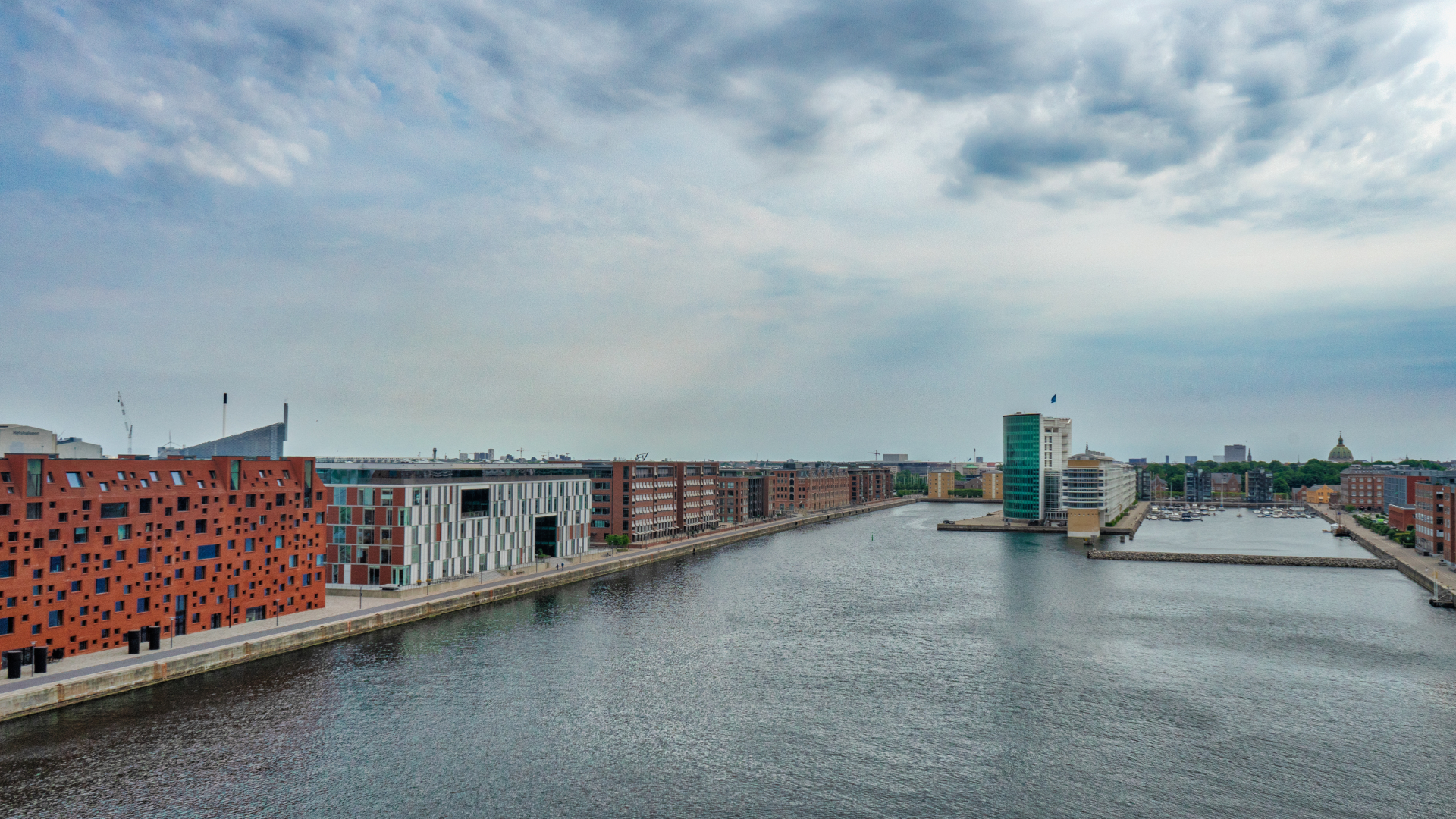 As the ship made its way out of Copenhagen, we passed a few points of interest. First, an old, wooden ship returns to a more modern world. 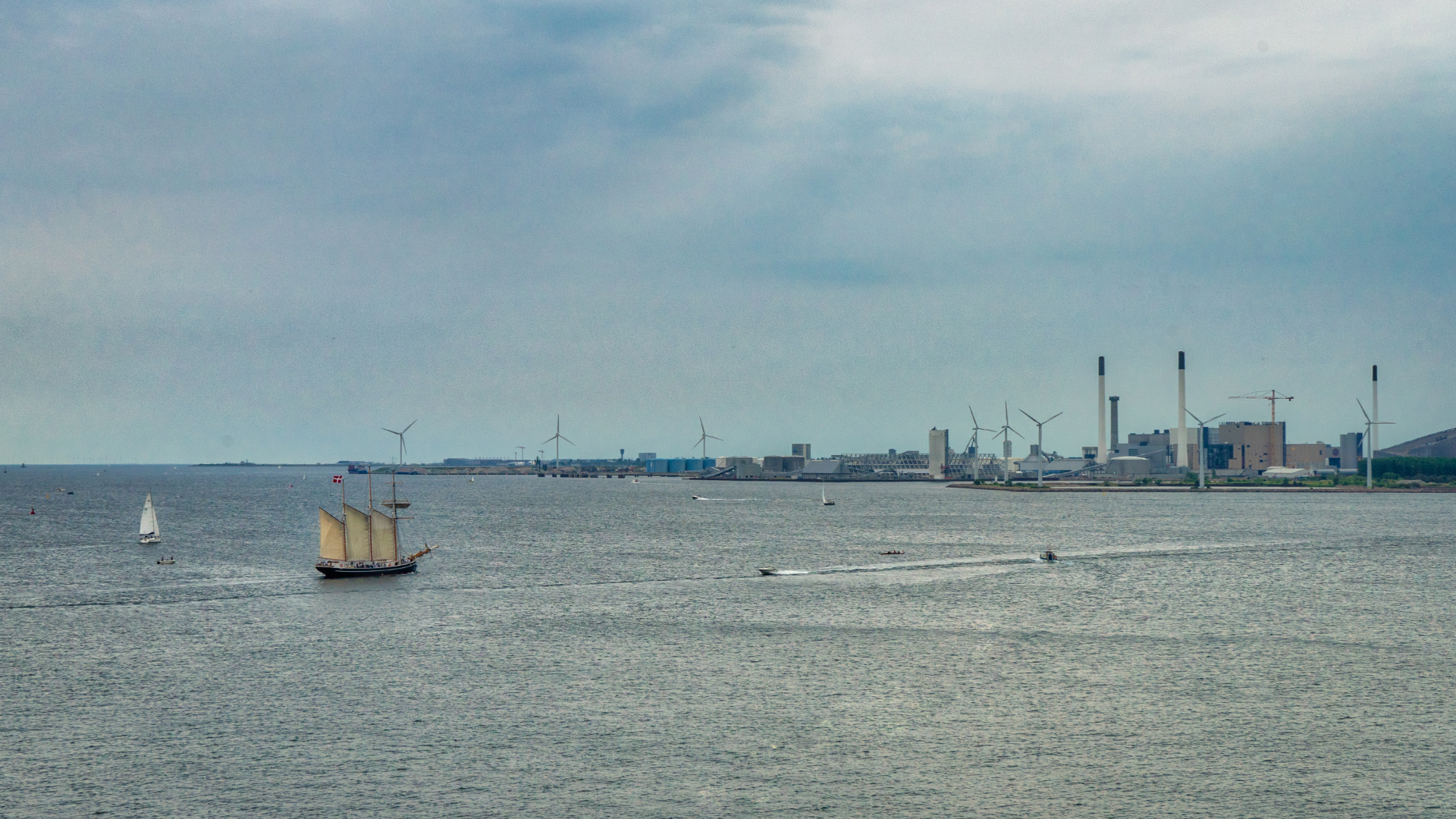 Then, with no time to change to a longer lens, the below image of a long string of wind turbines in the distance would have to do. But I kind of like the minimalism of it and the clouds. Sometimes you have to make the best of what you've got. 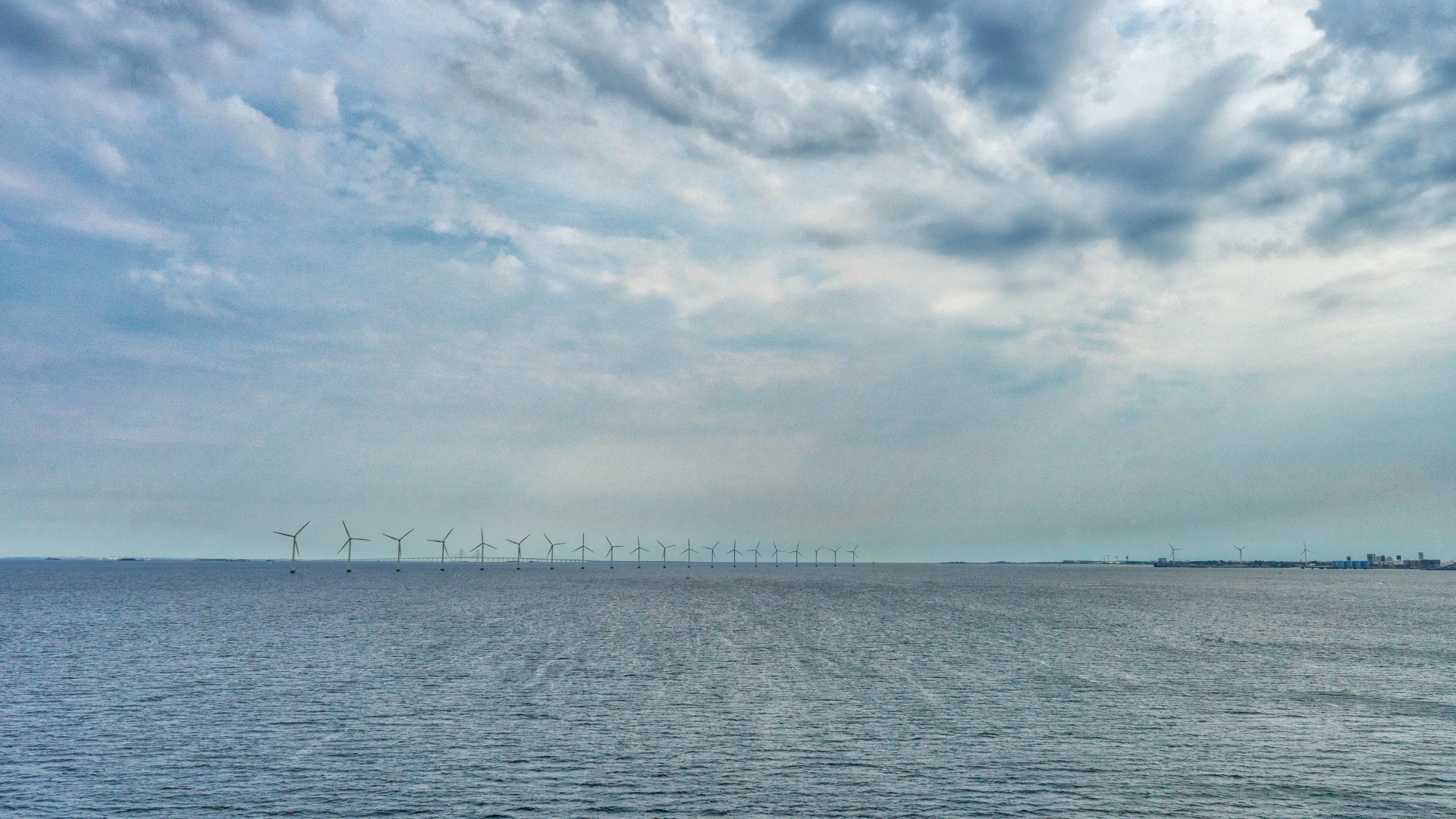 Several hours later, after emptying the famous restaurant Seven Seas all-you-can-eat buffet, we went back on deck to get some air and look around.

With gray clouds having covered the sky most of the day, I didn't have much hope for a sunset, but I got something that seemed at least as spectacular, and something you might only experience at  sea: a narrow orange strip of sunlight lined the horizon and served as the backdrop for a couple of far-off freighter vessels. Above the orange light, dramatic storm clouds loomed low. It was an incredible sight. Again, I might have benefited from a longer lens than my 24-70 mm, but the sense of scale may have suffered as a result. Showing how small the ship is in the hands of nature is one of the picture's strengths, in my own opinion. 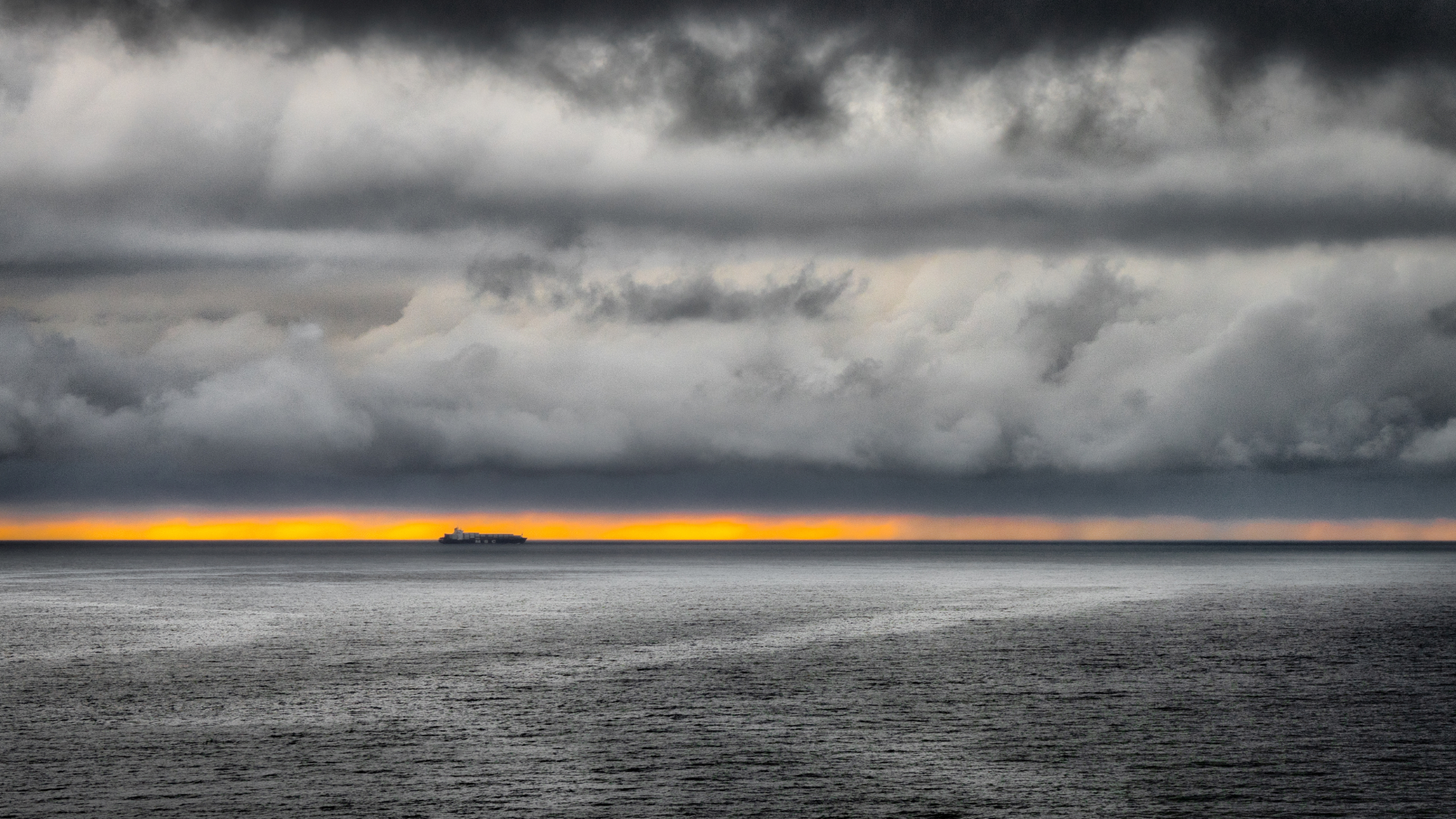 The next morning it was time for one of the scenes that I had been looking forward to revisiting: the approach to Oslo through the narrow parts of Oslo Fjord. Here you pass by small idyllic islands and hills dotted with colorful Norwegian villages.

Unfortunately, while the clouds had scattered somewhat, the sun was already so high in the sky, the light had turned harsh and difficult. I was still using my 24-70 mm kit lens since my much sharper 16-24 mm requires more of a foreground than you will find shooting these landscapes from a ship. I took numerous pictures, of course, but very few of them turned out well. Here's an exception, although it's still not quite what I had hoped for. 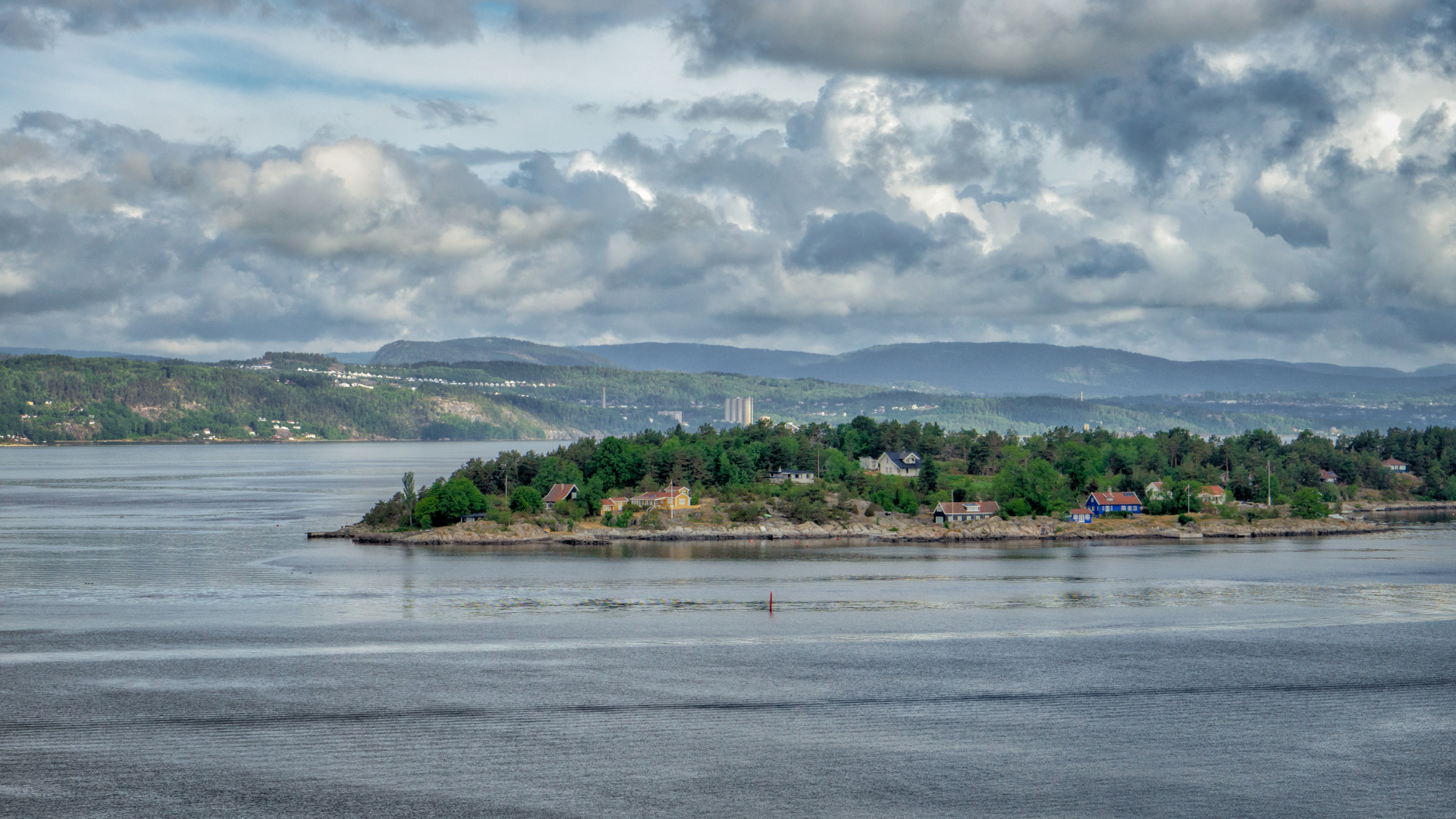 After arriving in Oslo we caught a hop-on-hop-off bus in order to get off at the Vigeland Sculpture Park a little ways out of downtown Oslo. Despite having been in the city several times, we'd always skipped it even though every guide book describes it as a must-see attraction in Oslo.

Well, it turned out the guide books were right. The Vigeland Sculpture Park is definitely worth seeing, even for someone like us who don't get terribly excited when we hear the word "sculpture". First of all, it's huge! You can easily spend half a day there. Secondly, the sculptures are... different. You won't see any statues of kings and generals on horses. Whoever this Vigeland was who created all the sculptures, he had a pretty unusual mind. Some would say pretty sick.

Anyway, from a photography standpoint there were lots of tempting motifs. Plenty of sculptures would have made for interesting subjects. However, to me, just taking a picture of someone else's piece of art is not very appealing. As a photographer you need to add to the experience and create something new by including the surroundings and the atmosphere at that particular moment. And that's exactly what I think I did with my personal favorite image from the park below. It's also one of my rare vertical images. 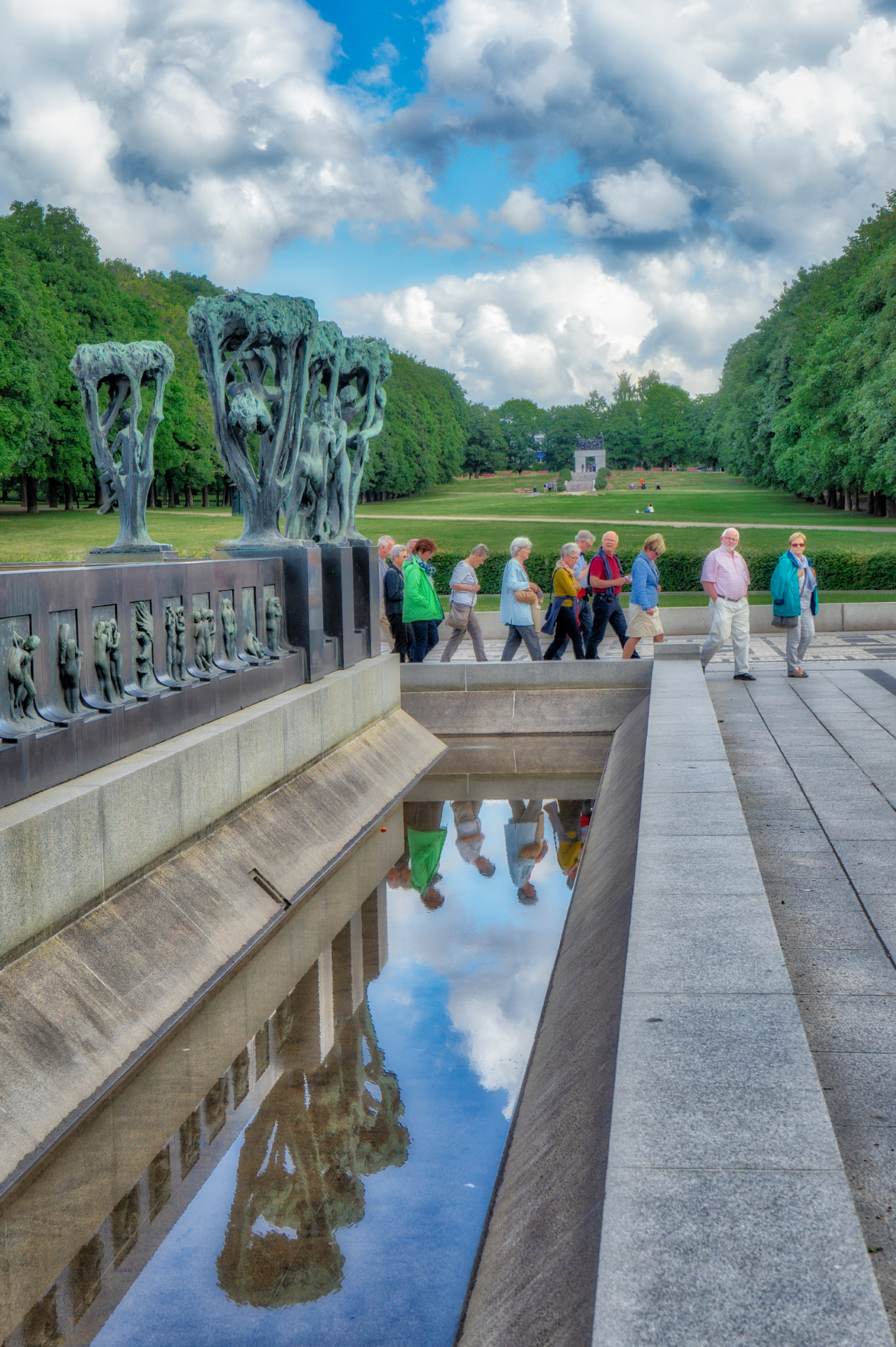 The next image is of a waterfall/fountain in the middle of the park. I didn't bring my tripod - only a monopod - so I couldn't make a true long exposure, which seems to be the agreed-on standard for waterfall photography. Personally, I think a faster shutter speed can be quite impressive too. 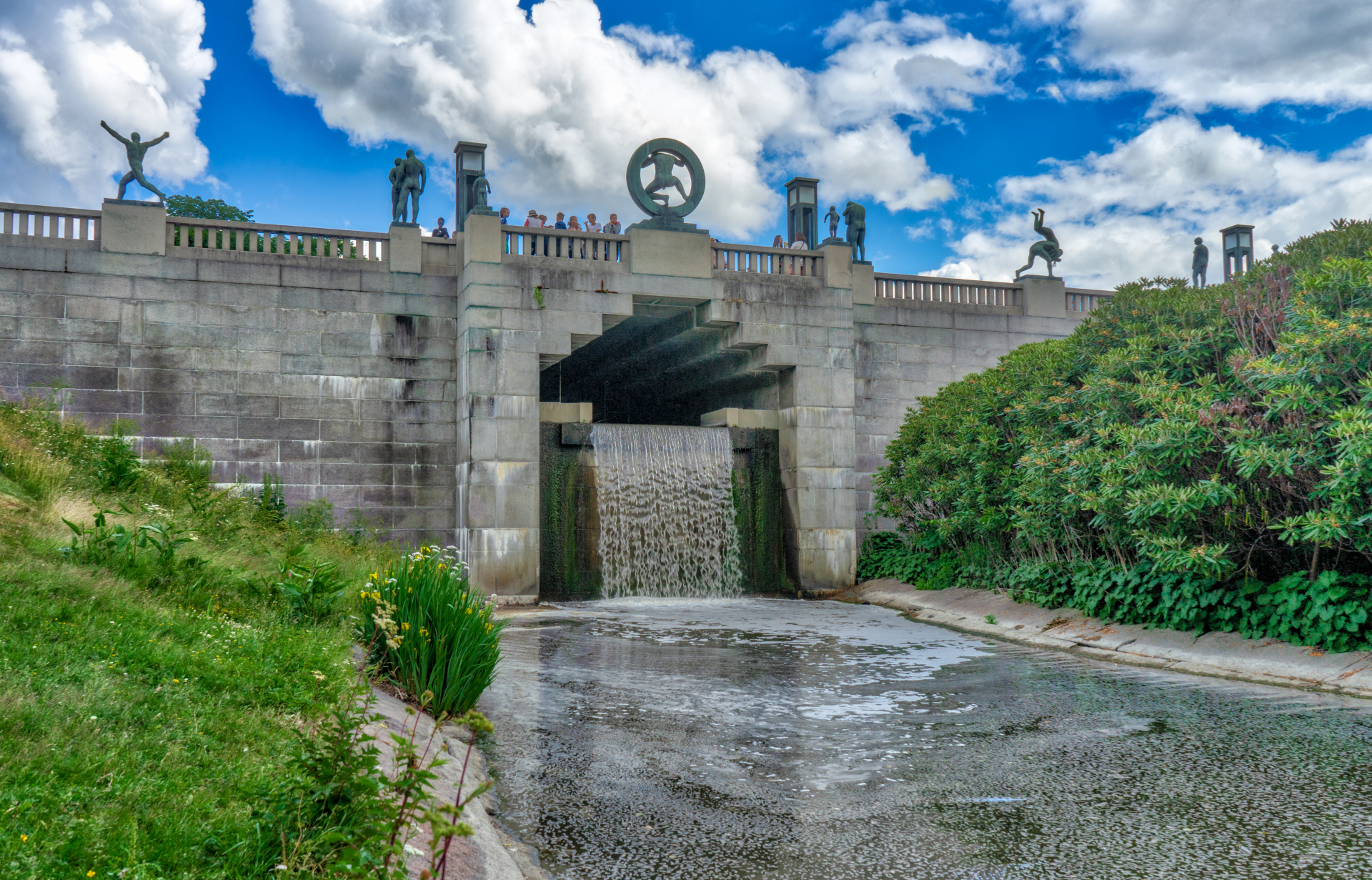 The last image from the park shows no sculptures (except for the tiny ones separating the benches), but there is plenty of beautiful landscaping going on too. This scene was just too beautiful and harmonic to ignore. 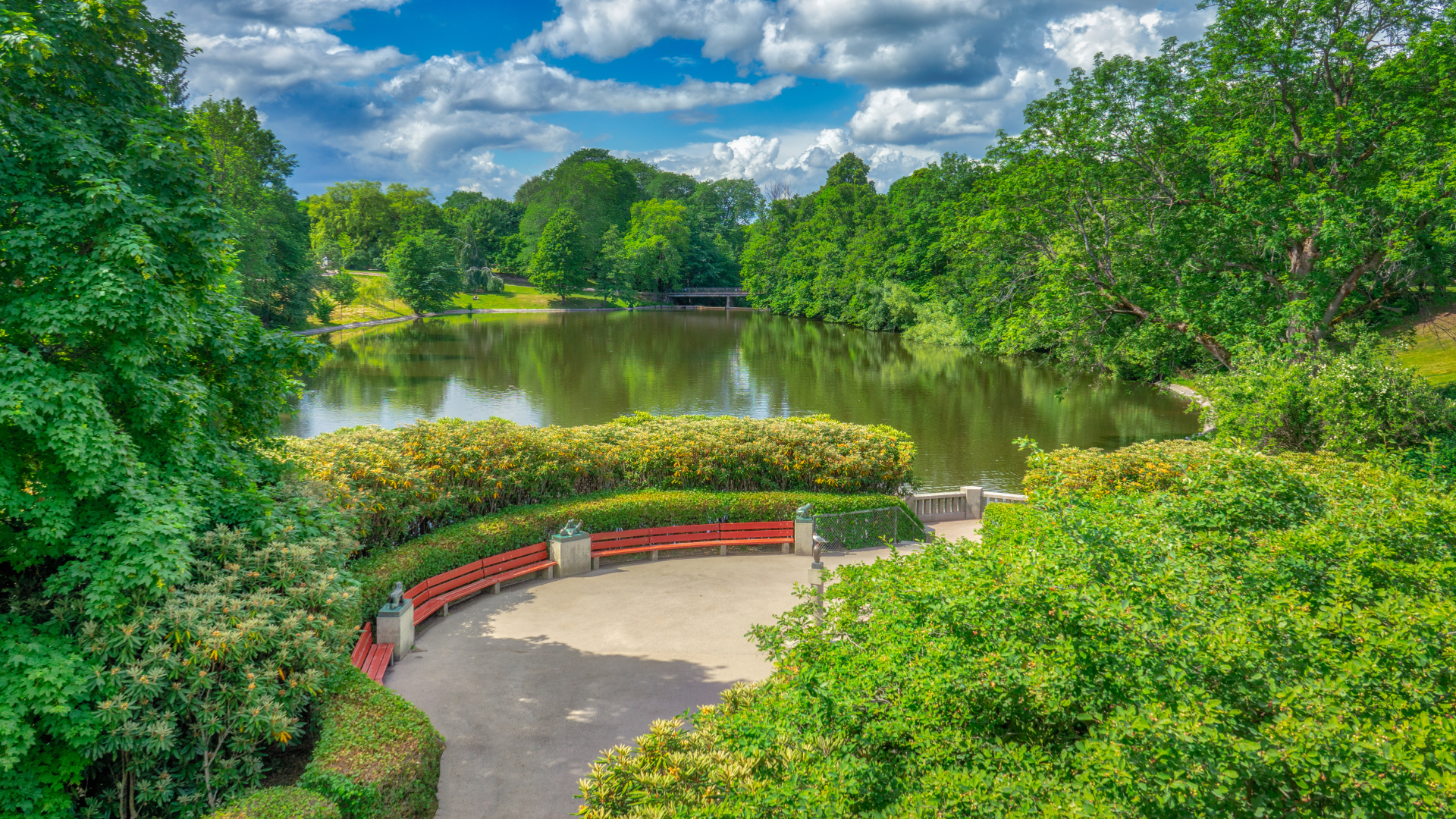 Next stop on our Oslo journey was the viking ship museum, which, like the Vigeland Park, was a first for us. Photography is always difficult inside a dim museum, but I got a few fairly good shots of the ships, including this one. 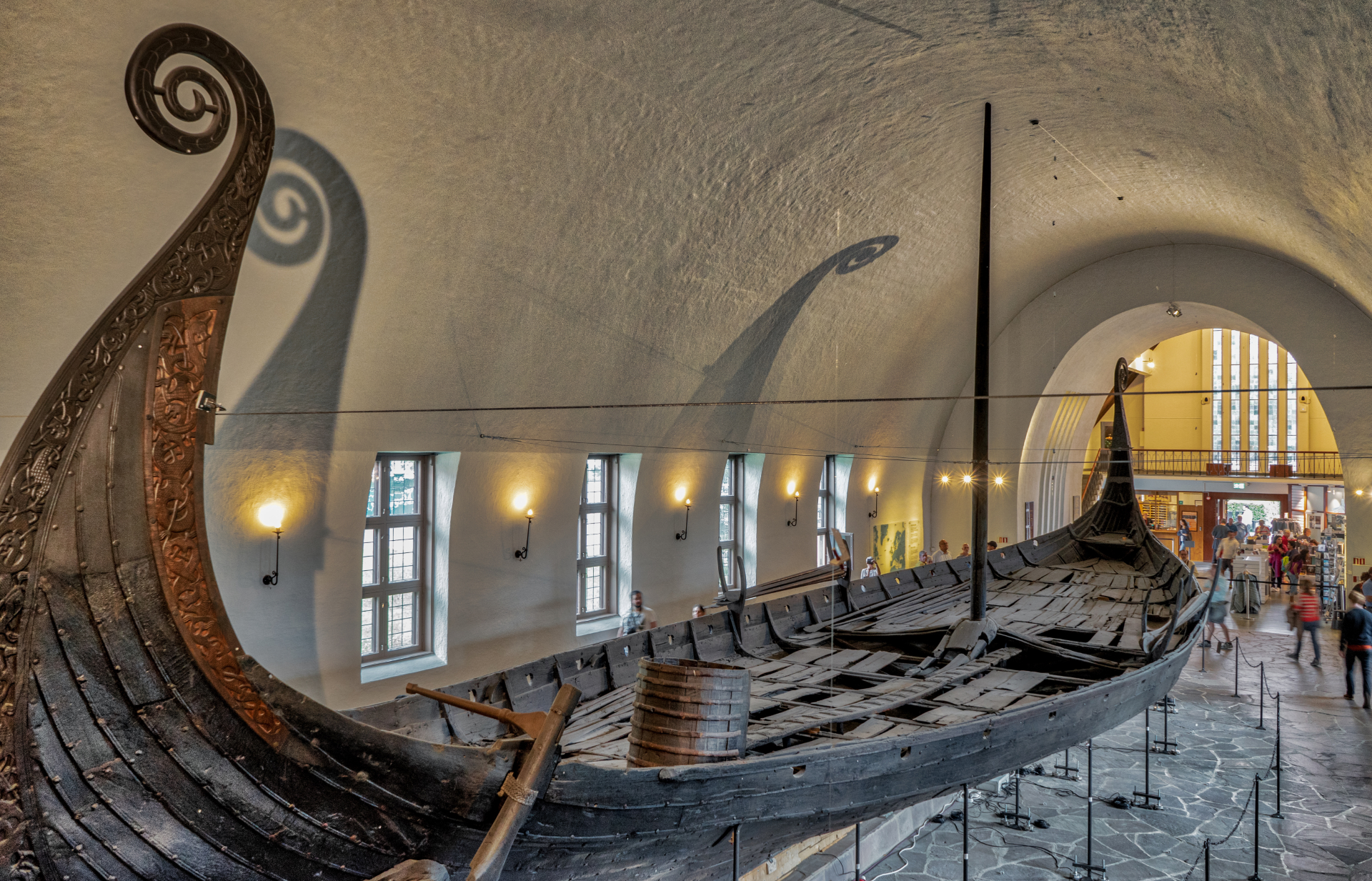 When we returned to downtown Oslo, it had started to rain so there wasn't going to be much photography happening. I did capture this image of the waterfront area as the rain moved on. By then it was time to go back to the ship, so except for a few more insignificant images from the walk back, that pretty much concluded the Oslo part of our journey. 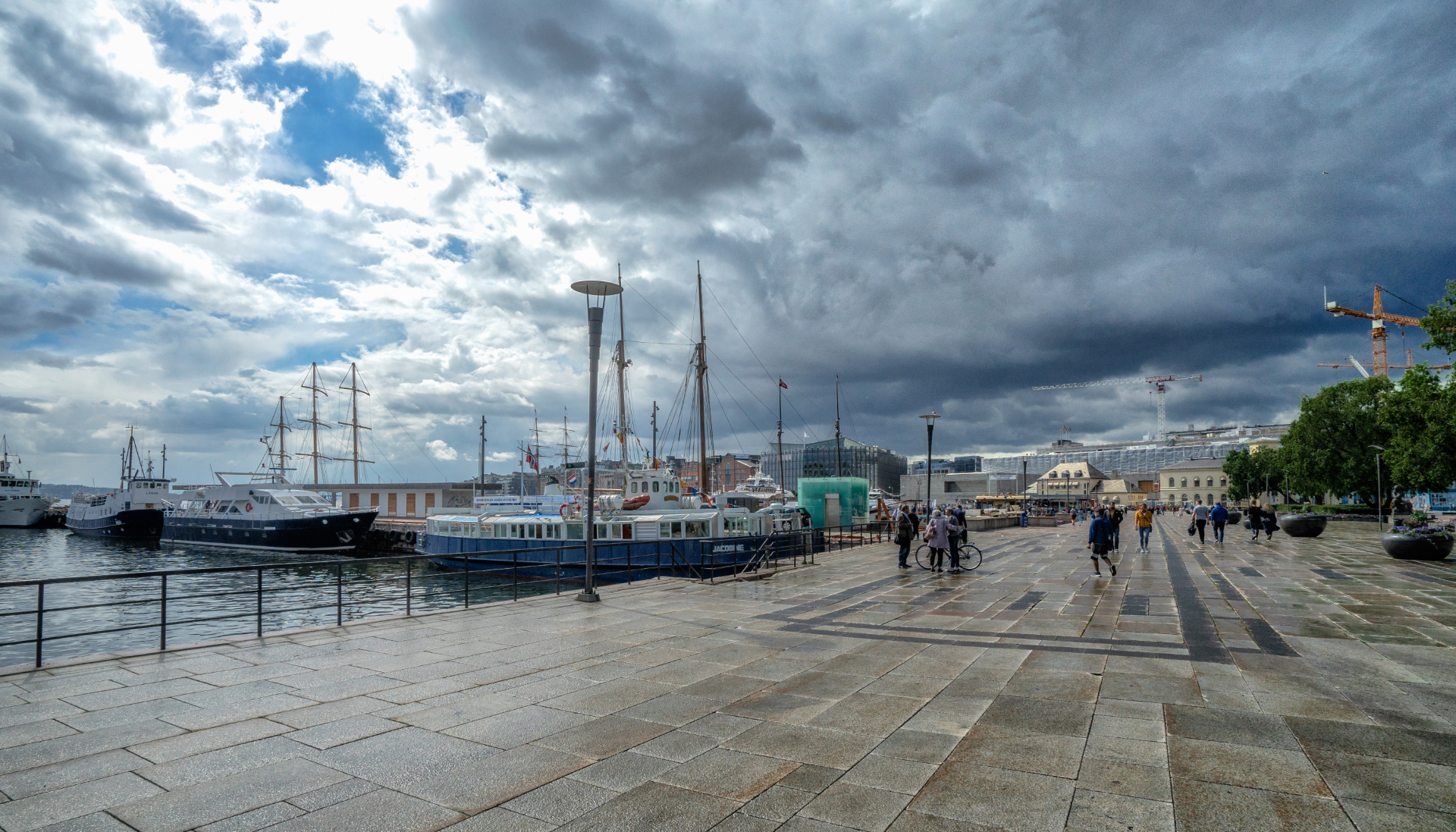 The ship, by the way, was this beauty. It looks impressive, but compared to real cruise ships, it's a dinghy. Still, it was plenty big for us and constituted a fine floating home for us during our voyage. 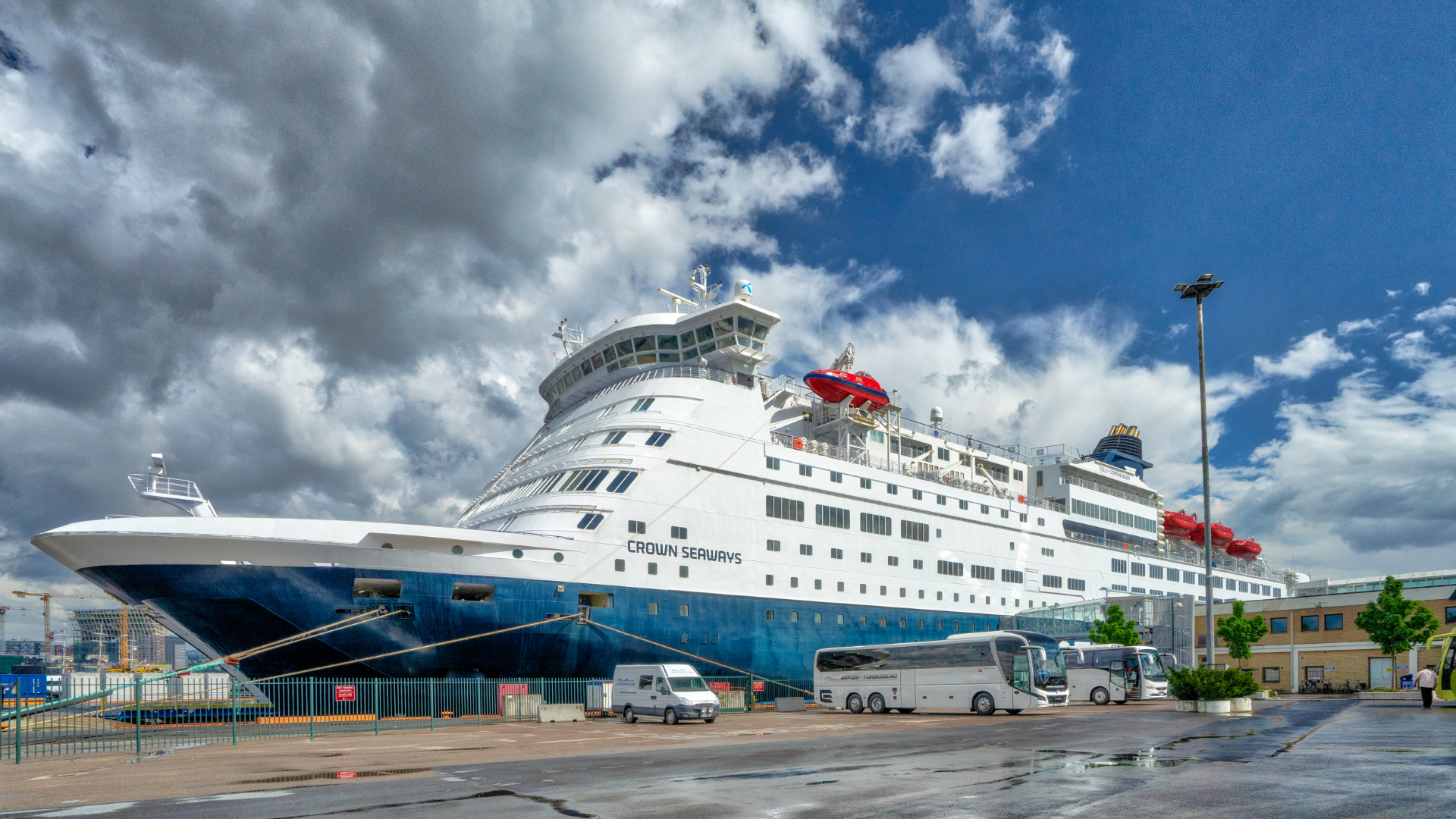 Exiting Oslo through the fjord presented a new opportunity for some great fjord photography, but again, it wasn't really happening. The light was dull, and I was again struggling with the dilemma of whether to use my sharp Sony 16-24 mm lens, resulting in distant subjects, or my 24-70 mm kit lens that may bring the subjects more forward, but is just visibly inferior in image quality.

In the below image I obviously used the former, and it works okay with the clouds and the little ferry and all, but again... better light, like a sunset, would have done wonders. So, note to self: next time we go on this Oslo trip, make it coincide it with early sunsets and late sunrises. Not that photography should be the main purpose of these trips... Perish the thought! 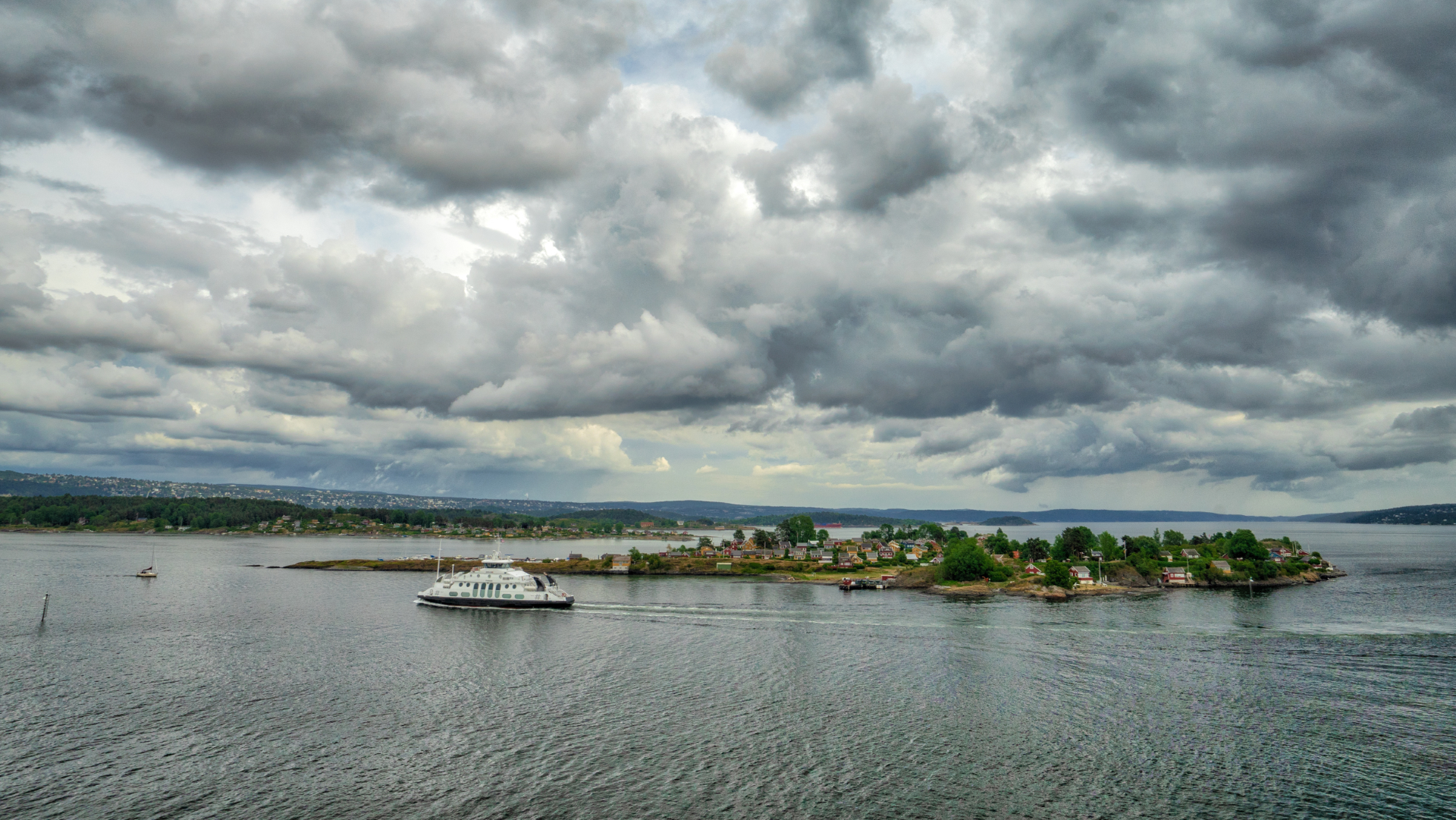 Later on, the restaurant where we were having dinner offered a great view of our trusty ship heading towards a storm. This is a picture taken with my cell phone as I didn't have my real camera on hand. Still, the result was one of my favorite shots of the day. 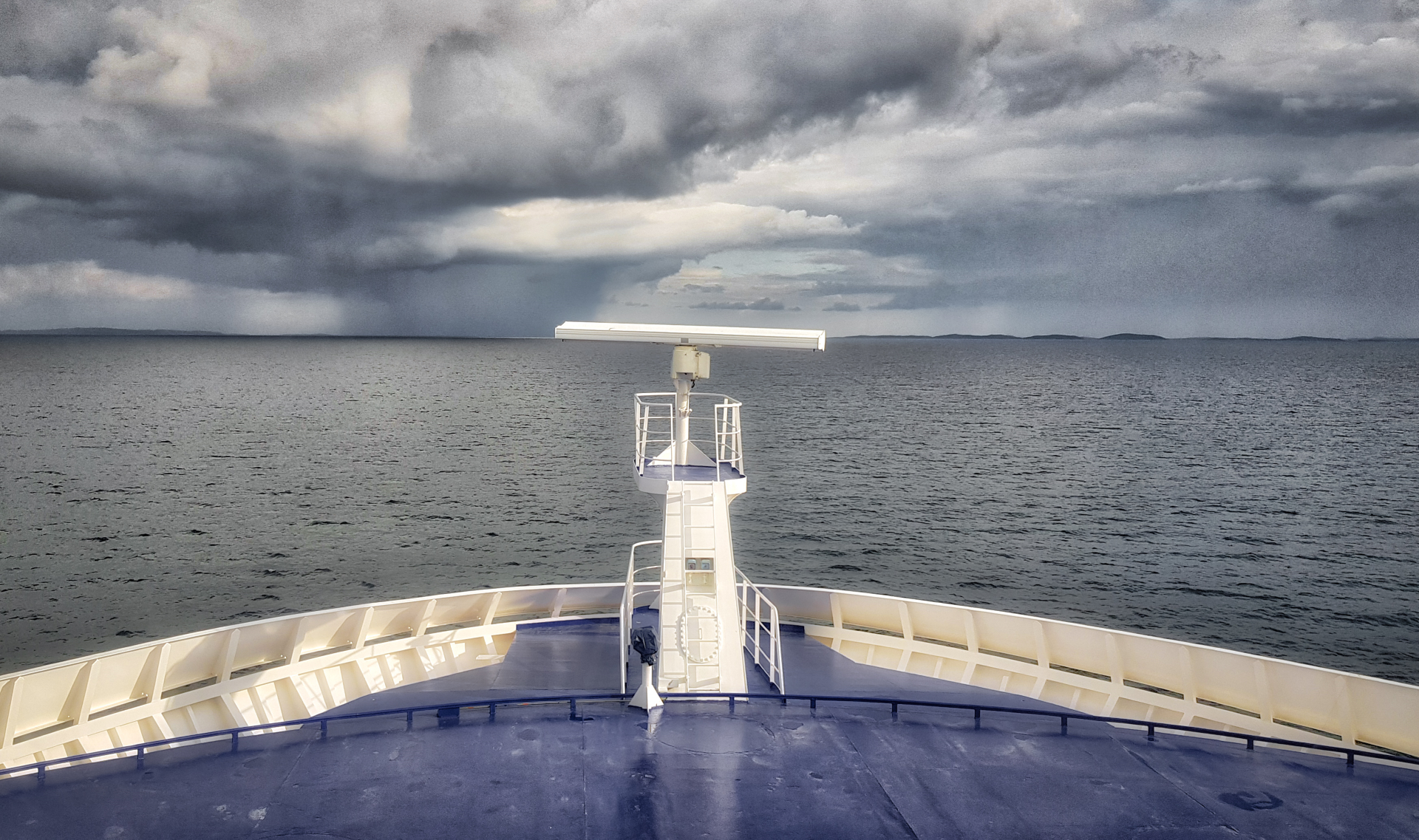 The above picture only marked the beginning of what was probably the photographic highlight of our two-day excursion. After dinner, like on the previous night, we went up on the deck to catch the sunset, and this time our faith was rewarded. I took numerous pictures as the sun disappeared below the horizon, but these two tell the story of a magical evening that put a perfect end to our trip. 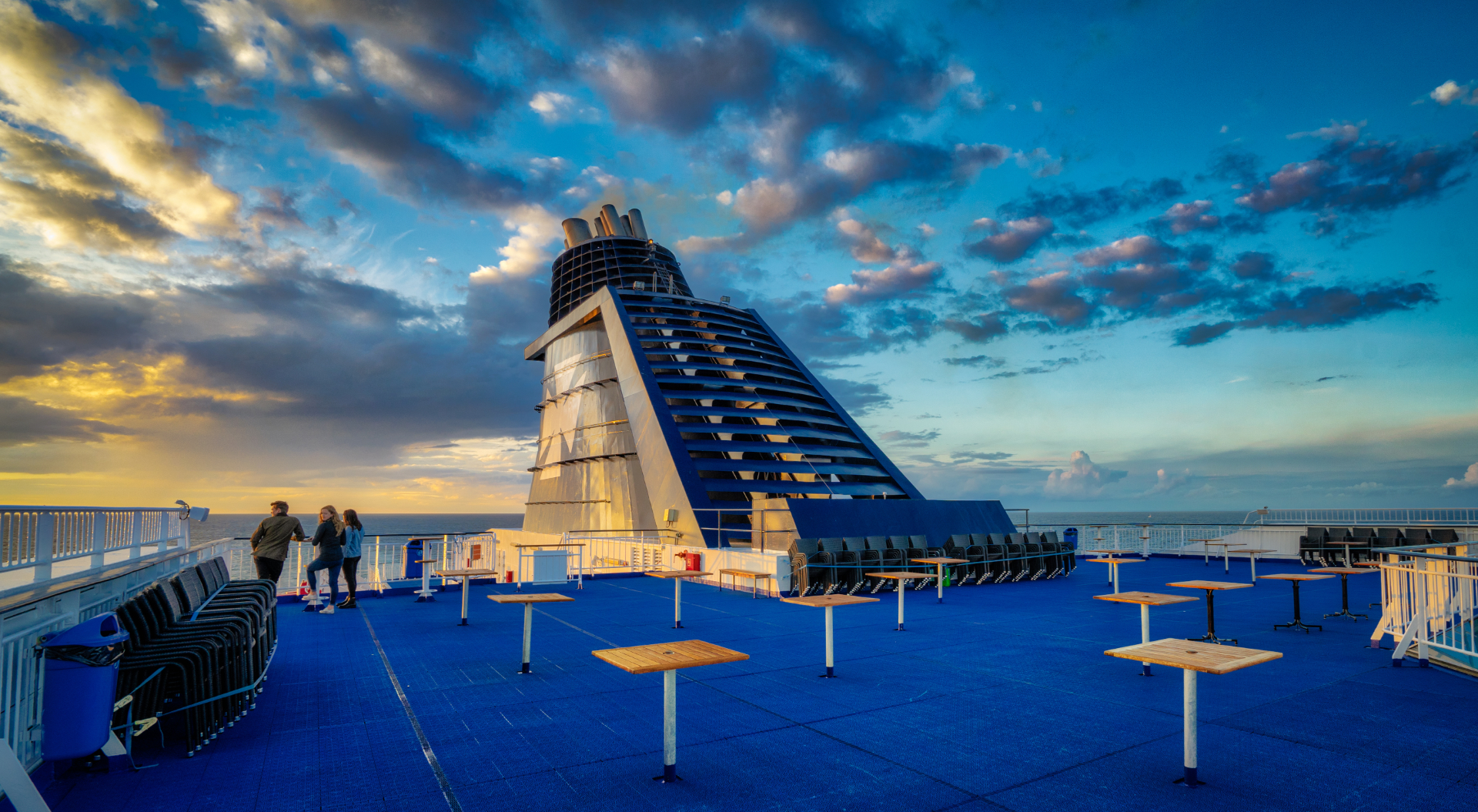 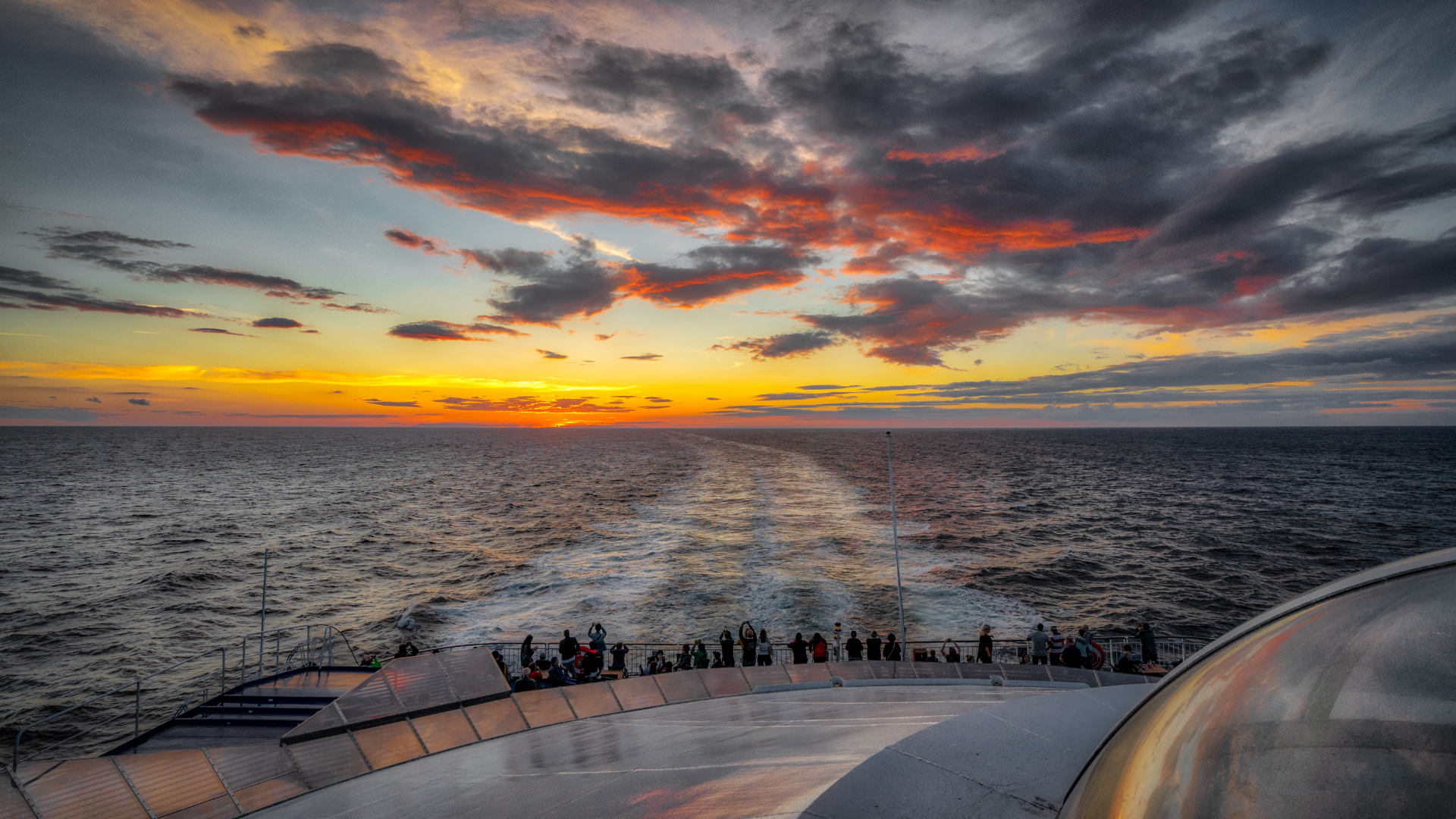 Actually, it wasn't quite the end. We still had one sleep left before arriving back in Copenhagen, and the next morning we, again, had a little time to go outside. Our intention was to have a look at Kronborg Castle as we sailed past, which we did, but it was too far away for me to get any interesting shots of it. Instead I caught the below image of the Helsingborg-Elsinore ferry tasting our wake. 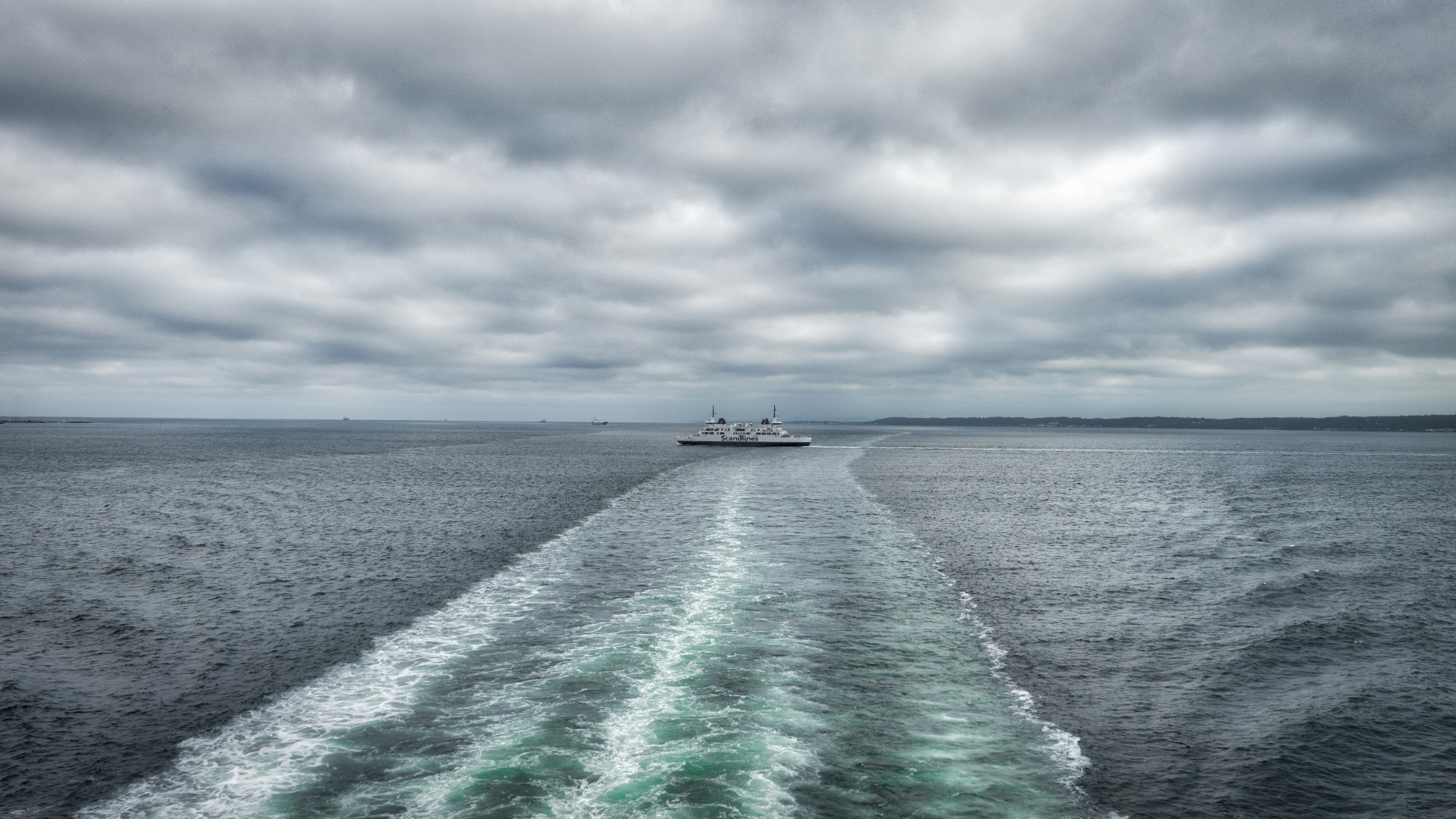 About an hour later we arrived in Copenhagen and departed the ship for the last time. We'd had a great time relaxing and being tourists. Photography-wise I still didn't quite get the ultimate pictures of the Oslo fjord, just as we didn't spend enough time in downtown Oslo to improve on my existing pictures of the city. Still, I was happy with seeing and photographing new locations in Oslo and getting some really nice ocean shots.