I'm not a bird photographer (but swans are awesome)

I'm losing track of how many times I have been out in nature taking pictures when passers-by have stopped, looked in the direction that my camera was pointing, and asked, "What are you looking at?" In most cases, it turns out that what they are actually asking is, "What rare bird have you spotted?"

To most people, a middle-aged man carrying a "real" camera (as in, not a cell phone) in nature means that he is a bird photographer. The concept of just taking a picture of the landscape, or a tree, or a creek is apparently very foreign to the average person. At least, they seem quite surprised when I explain it to them, and they quickly move on. Not interested.

And it's not that I don't see the point of bird photography. I would love to be a great bird photographer, but 1) I can't tell a seagull from an eagle, 2) I don't have the patience required, and 3) I can't afford the lenses bird photography calls for. The last point should be a dead giveaway to those who think I'm a bird photographer. How could I possibly be a bird photographer when the lens attached to my camera is a 300 mm at best? Don't people know that you need at least a 400 mm lens for that?

Now, all this doesn't mean that I haven't been known to push the release button if a bird happens to enter my focus area and that I haven't taken some fairly awesome photos featuring birds. I believe I have. And there is one bird that is an exception to everything I have just said about me and bird photography: swans. While you cannot call me a bird photographer, I would definitely categorize myself as a swan photographer. I love swans. They are some of the most beautiful and most photogenic animals on the planet. Especially the kind that you find in my neck of the woods: the mute swan. It also happens to be the national bird of Denmark, and I for one am thrilled about that.

To an actual bird photographer, swans are probably what a Toyota Corolla is to a car enthusiast. Plain, common, and boring. Not to me. They may be common, but they are anything but plain and boring. In fact, they are majestic and inspiring. The challenge in swan photography lies in catching them in the right surroundings and having them pose, or interact with each other, in an interesting way. That requires a certain amount of patience and time spent observing them.

My interest in swans, I think, comes from my wife, the American, who wasn't used to the kind of swans we have in Denmark and made me open my eyes to their beauty. I mean, I grew up here and was used to swans and, like with so many other things before photography changed how I look at just about everything, I never really gave them much thought.

Another boost to my swan fascination came with the image below. It was taken not too long after I got my first "real" camera (my Sony A33) and is probably still among the three best photos I have ever taken (which, in a way, is a little sad considering all the practice I have gotten since). Look at that composition! How the swan on the left provides perfect balance to the castle on the right, and how the swan in the center of the image looks straight into the camera. Sure, I have enhanced it and turned the "magical fairy tale" knob to 10, but I like it. And it really made me consciously seek out swans to include in my images ever since. 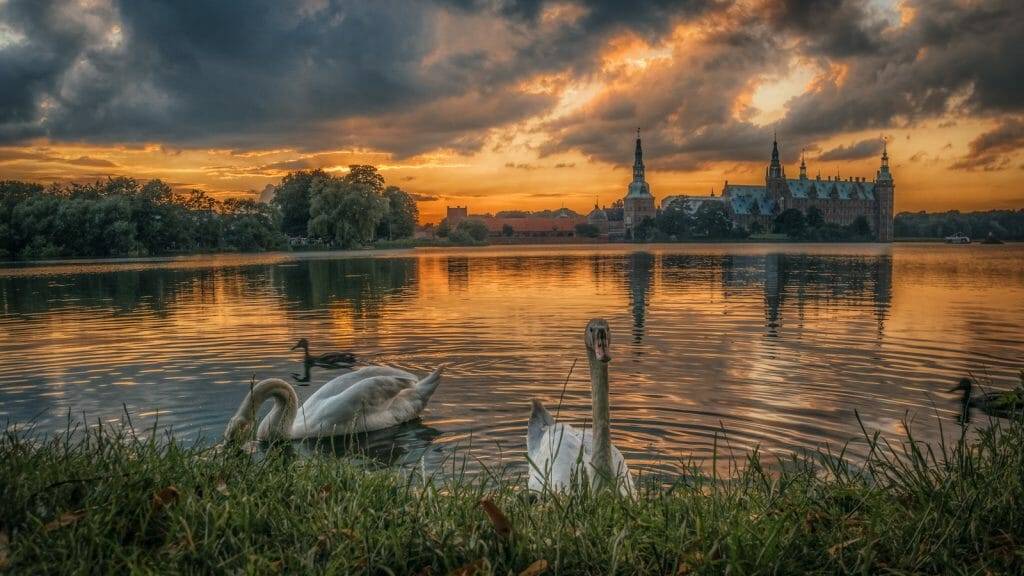 The next image is also several years old and is my first picture of a swan with its wings spread out. It looks like an angel. Now, if you live next to swans and see swans every day, seeing them with their wings spread out like that may not be such a rare occurrence. But while I see swans quite often - probably once or twice a week - the times I have seen them in the last five years, with their wings spread out like that, can be counted on one hand. And catching them like that from the right angle and distance is even rarer. So it's something I'm always hoping will happen when I head to a place with swans, and it almost never does. 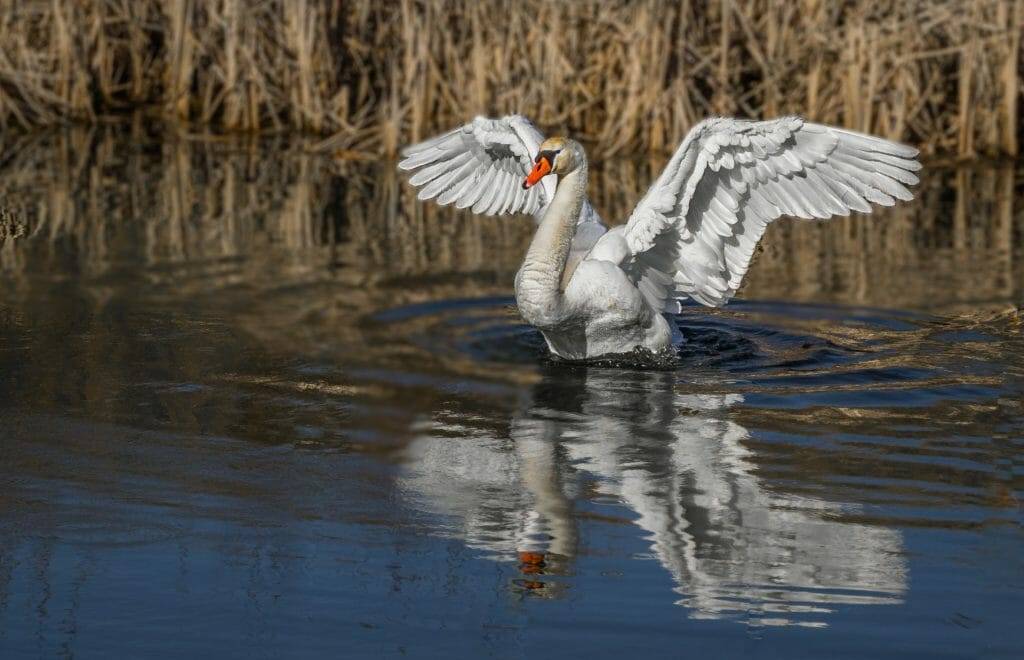 One of the things that make swans so special is their monogamy. They stick to the same partner for life and raise a new brood of cygnets every year. On a few occasions, my wife and I have followed a swan couple through a season and seen how they have built their nest, laid on their eggs, and taken their tiny new cygnets for a swim. And we have seen the cygnets grow and finally replace their gray ugly duckling plumage with beautiful white feathers. This can also be a heartbreaking experience as sometimes the swan couple will start out with six cygnets and then lose them one by one to predatory fish or birds until only a couple remain. In the below picture, a family of swans (and a friendly duck) is chilling in a local creek under the moonlight. All right, I admit, the full moon has been added, but the moon really was out that night, although not quite in such a favorable position. 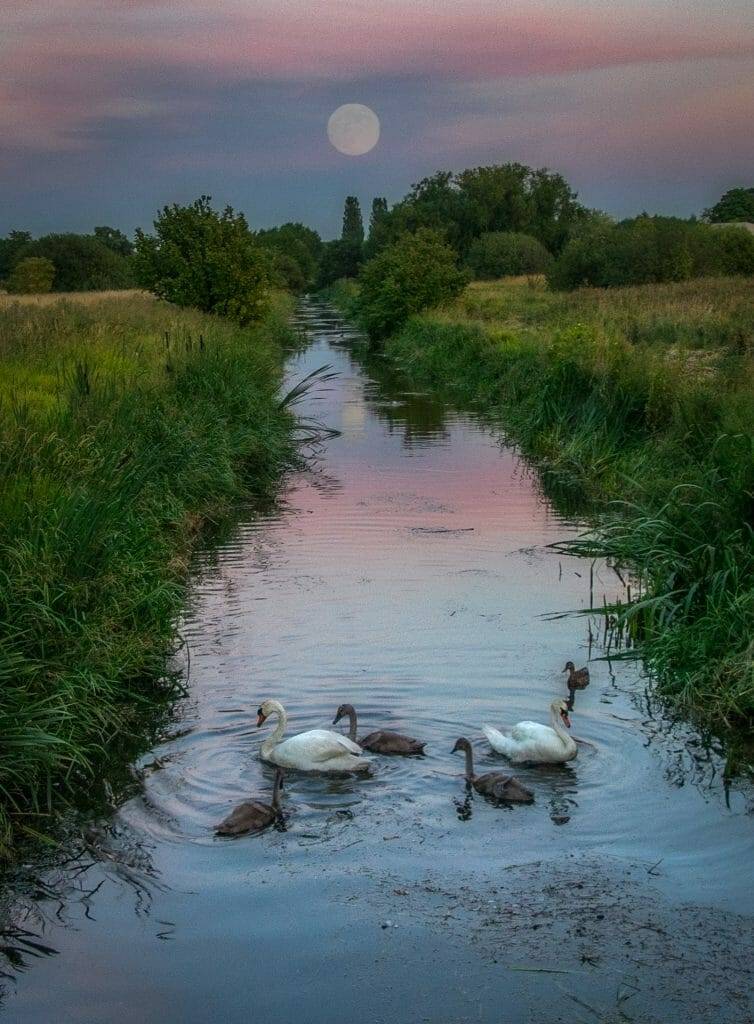 Swans do other things than just be beautiful and majestic. They can be some nasty birds and apparently very territorial. One afternoon I was walking along a lake when the below scene played out. One particularly angry swan was busy keeping his part of the lake free from other swans. It's extremely dramatic when big birds like that get in each other's throats, and you really don't want to make a swan cross. This was shot with a cell phone and turned out very well for me, but at the expense of the poor couple that had ventured into the angry swan's territory. Or maybe they were the bad guys who had ventured into the angry swan's territory and got what they deserved. Who knows? 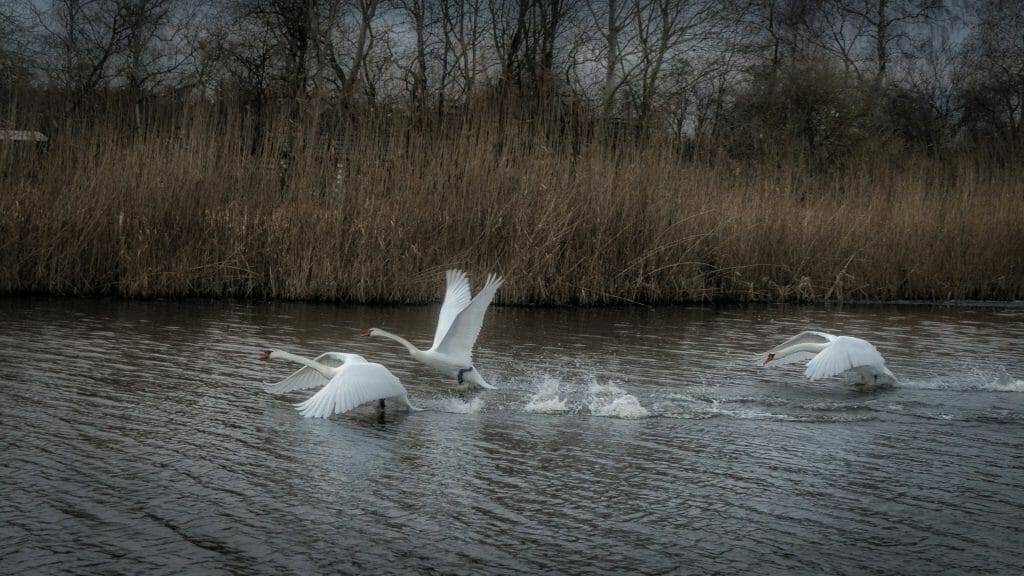 The next image is from the same lake and may even be one of the same swans, but a more common situation. There is nothing as serene and beautiful as a swan quietly drifting in and out between tufts of grass and waterweed during a sunset. They are like strange extra-terrestrial beings gracing our world with their other-worldly presence.

Standing close to a swan, you wouldn't think that their size would allow them to be particularly good flyers. But as the perfect beings that they are, flying is of course not a problem. In fact, standing underneath a flock of swans as they pass over you is a magnificent experience. You hear them before you see them. Whoosh, whoosh, whoosh. The sound of their big wings is just one of their many majestic characteristics that leave you in awe and make you look up. If you are really lucky, as I was while taking the below picture, you are carrying your camera, the camera has a suitable lens mounted, and the shutter is set to a sufficiently fast speed. That rarely happens to me since my camera is usually in landscape photography mode, but in this case, everything aligned and I got one of my few sharp pictures of flying swans. 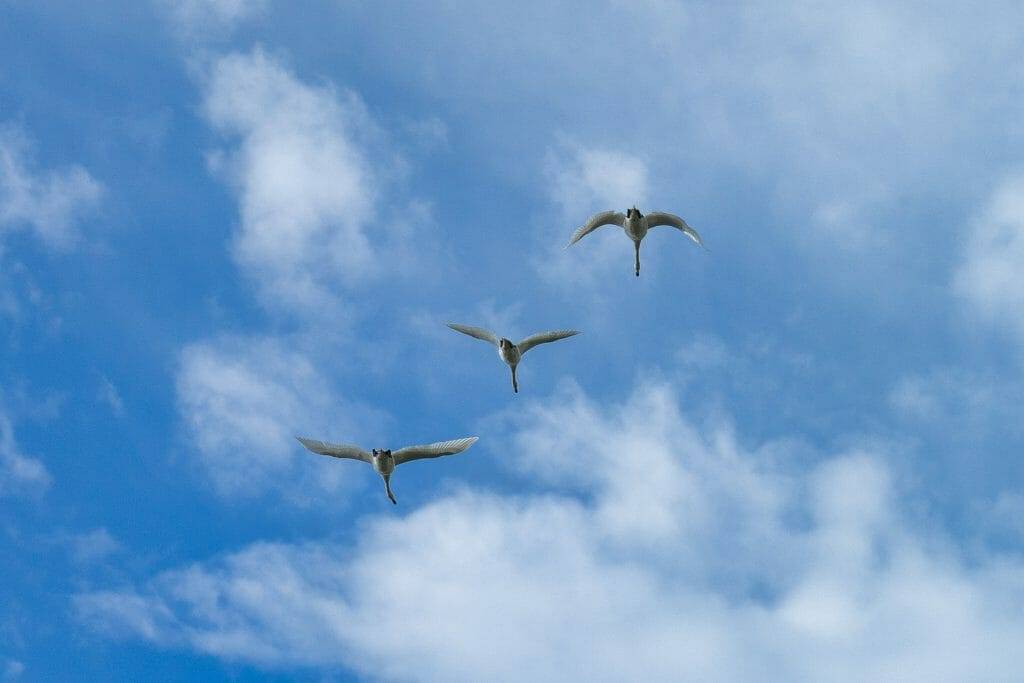 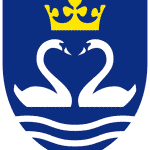 Last but not least: the swan heart image. I had been chasing this photo for almost as long as I have been chasing swans. Inspired by the town arms of the city that I work in, I wanted so badly to photograph two swans forming a heart with their long, beautiful necks. I had been close many times where I would see a swan couple drifting toward each other, only to break off at the last second or stick their necks into the water for food just at the crucial moment (I can't count how many pictures I have of swans with their heads in the water).

And then, finally this year, on Valentine's Day no less, this happened. It was a magical moment. The swan on the left had just landed on the water after having been out flying for a while. My prejudice about gender roles tells me that it was the male. The other swan - the female - saw him land, and they immediately headed towards each other and met in this, not quite perfect, heart shape in the middle of the lake. They spent the next few seconds almost wrapping their necks around each other in a loving embrace. I was absolutely thrilled.

I have tons more swan pictures in my collection, but these are some of the highlights. Swans are a subject I never get tired of, and I find it almost impossible to walk past a swan without taking its picture. Other birds may be rarer or more interesting in many ways, but none are as beautiful and photogenic in all their various poses and moods.