Vancouver Island in the Baltic Sea: Landscape photography on Bornholm

Iceland, Faroe Islands, Vancouver Island, Bornholm... Wait a second... What did I say? Bornholm? Did I really just name Bornholm in the same sentence as those other world famous photography havens? It appears that I did, and it may be completely ridiculous, but hear me out. When I went to the island of Bornholm in the Baltic Sea in October, for the first time in my life, I, at times, felt close to what I felt during my short visit to Iceland and what I imagine others might feel when they visit the rugged coast of Vancouver Island and the vertical rock walls of Faroe Islands.

Bornholm is a 588 square kilometer island about 150 kilometers from the rest of Denmark. It is in many ways a concentrated platter of most of what landscape photography has to offer and presents a great variety in a within a very small area. You can drive from one end of the island to the other in less than an hour and on the way see rocky coastline, majestic forest, sweeping open land, sandy beaches, idyllic fishing villages, valley gorges, and of course the cream of crop, the great castle ruin of Hammershus.

It turned out we were practically next-door neighbors to the last-mentioned attraction, so that made it a natural starting point for us. Hammershus Castle Ruin is an ominous fortress complex sitting on top of a hill overlooking the Baltic Sea. It's the largest and most well-preserved ruin in Denmark and is a very impressive sight. It has lots of interesting little details, but it begs for a widescreen treatment, which is what I provided in this stitched panorama. For having been taken in relatively bland middle-of-the-day light, I couldn't be happier with the result. The clouds help, too.

However, I knew as soon as I saw it that the perfect image of Hammershus would be taken during a sunset with dramatic colors and clouds in the background. To my joy, when, after spending the afternoon in a nearby town, we returned to our vacation house around sunset, the conditions were ideal. I dropped off my wife at the house and sped back to the ruin, where - having the whole castle ground to myself - I captured the below image, which is very close to what I'd envisioned earlier in the day.

In many ways, the big, gloomy looking ruin is very uncharateristic of Bornholm. The human effect on Bornholm in general bears a lot more resemblance to the Hobbit village in Lord of the Rings than it does to Mordor. Along the coastline you will find one beautiful, idyllic town after another. One of the most acclaimed examples is the town of Gudhjem (God Home) that we visited on our second day. The light was less than ideal (if light can be gray then gray it was), which meant the town didn't show itself from its best side. (The island of Bornholm is actually nicknamed "The Sunshine Island" because it has the highest number of sunshine hours on average over the course of a year in all of Denmark.) Still, it got better while we were there and I managed to secure a nice panorama as the cloud layer was opening:

It appears as if all I did on Bornholm was shoot panoramas. That's not quite the case, but I do need to show you one more, which was taken from a location very close to the one above. I feel it's one of my best multi-image, stitched panoramas ever. Not just because of how the pieces fit together and constitute a killer composition, but because of the technical challenges it offered, including the strong backlight and the fact that I was positioned close to a 5 meter edge, falling off which would have seen me land in the backyard of the yellow house in the foreground. It was so difficult that, after shooting it during our visit to Gudhjem, I actually had to go back the next day to reshoot it, because I didn't get it right the first time. I call the image "Sun Over Gudhjem", and as any Dane can tell you, that is also the name of a culinary Bornholm specialty: an open sandwich consisting of smoked herring on rye bread topped with a raw egg yolk. I personally I like my version better.

As you drive down along the coastline between idyllic towns, you often have a good view of the rugged rock formations that make up the edge of the island in a lot of places. In a Danish context, this is pretty unique. No wonder I was extremely excited to get a close look at these mysterious shapes. I even climbed out among them  and made good use of my trusty wideangle 16-35 mm lens, trying to imitate rugged rock images from more famous places like Bryce Canyon or the Oregon Coast. 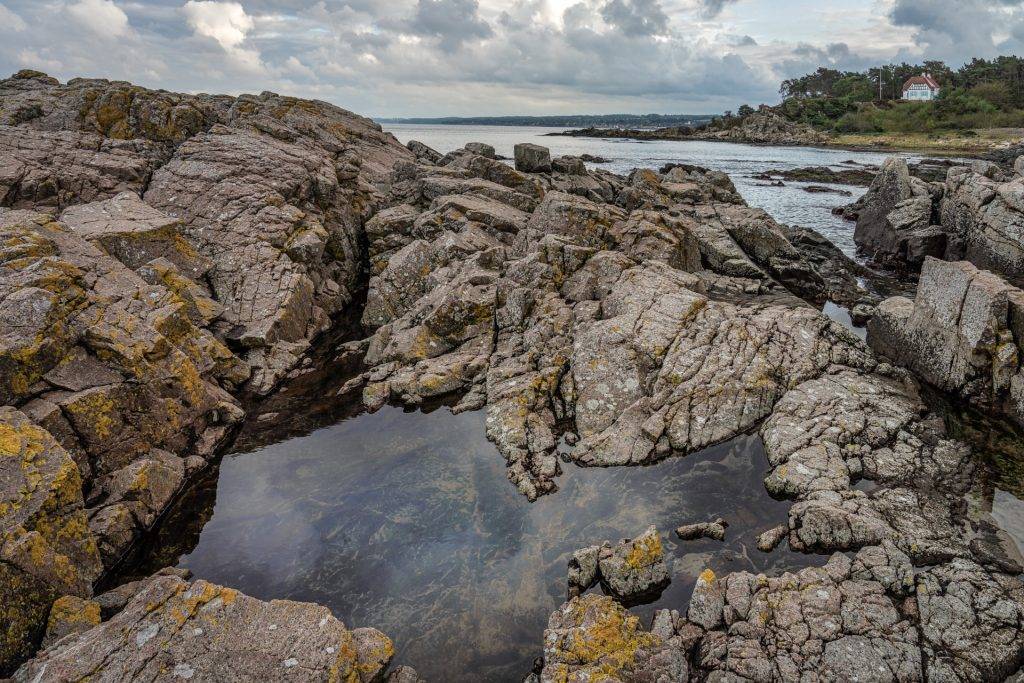 The third day of our Bornholm vacation proved to be the most satisfying so far when it came to photography and adventure. The day started with us taking the short drive to an old abandoned quarry that has turned into a lake and nature area: the Opal Lake. We walked on a path that took us higher and higher above the lake. With every step that we took, the view got more beautiful, culminating near the top with this breathtaking spot that surpassed all my expectations of what Bornholm would have to offer. It looked like one of those iconic places where landscape photographers from all over the world stand in line waiting their turn to get the shot, except there was no one there but me and my wife. Note, by the way, that you can see the Hammershus Castle Ruin in the background behind the tree. 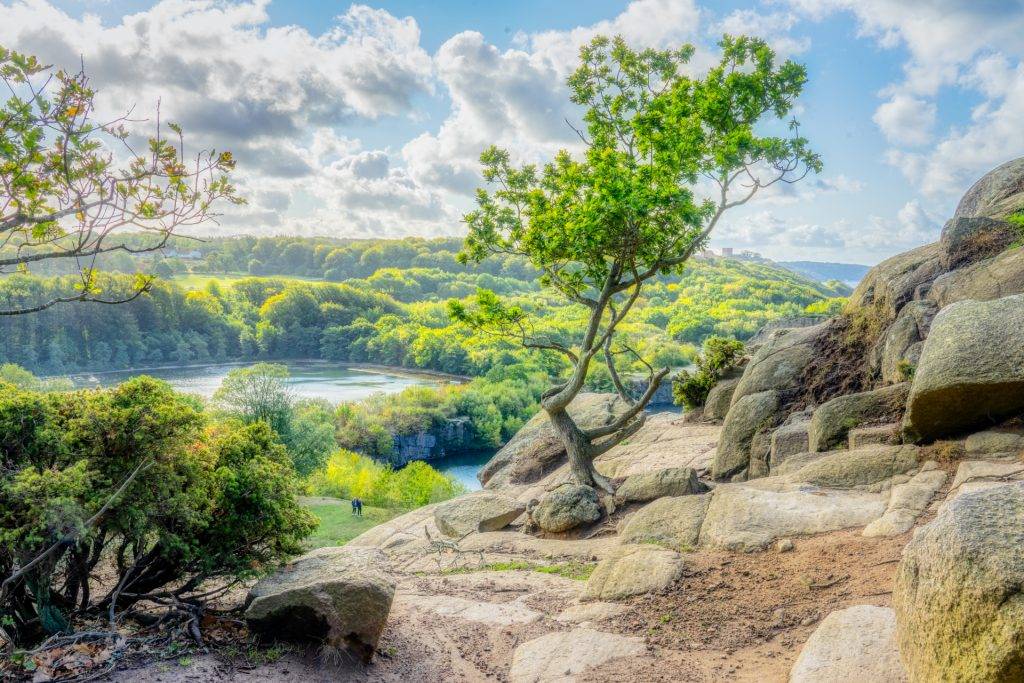 After circling the Opal Lake we drove to no less than the tallest waterfall in Denmark. And here I must admit that the comparison of Bornholm to other more famous landscape photography locations becomes a bit of a stretch. Because when it comes to shooting waterfalls, Denmark is probably the last place you want to visit. So when I say "the tallest waterfall in Denmark" we're talking a 10 meter tall trickle that no doubt leaves many visitors wondering if their leg is being pulled. Still, that doesn't mean you can't shoot good photos of it, which I think I did. And to be fair, my guidebook said it's a lot more impressive in the spring than in the fall. I guess I will have to return at a more favorable time. 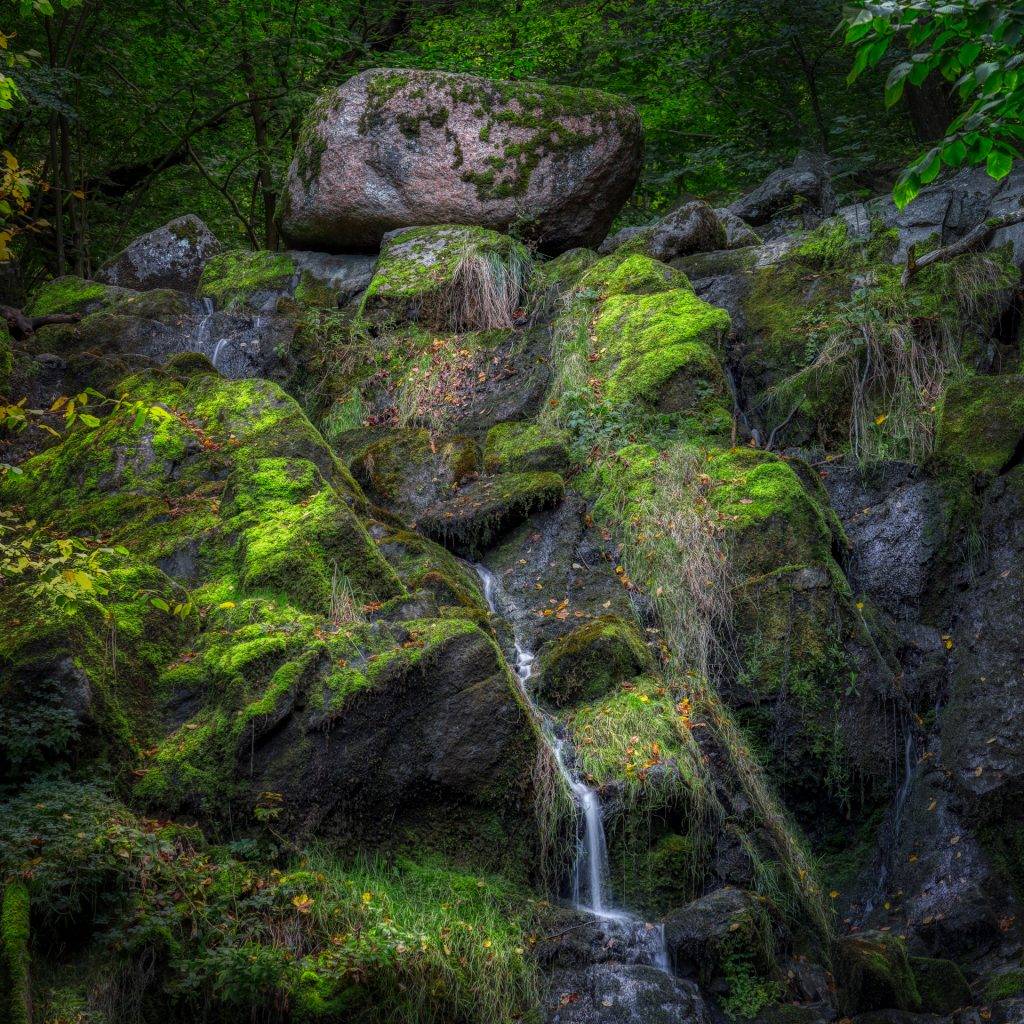 Our last stop of the day was the Dueodde Beach, which is famous for its incredible fine, white sand that would rival that of much warmer beaches in the Caribbean. And while the sand was indeed fine and white, that's not what attracted me the most about the place once we arrived.  The tall lighthouse towering over the beach constituted a much better focal point, and this combined with the waning golden hour light made for a perfect end of the day. 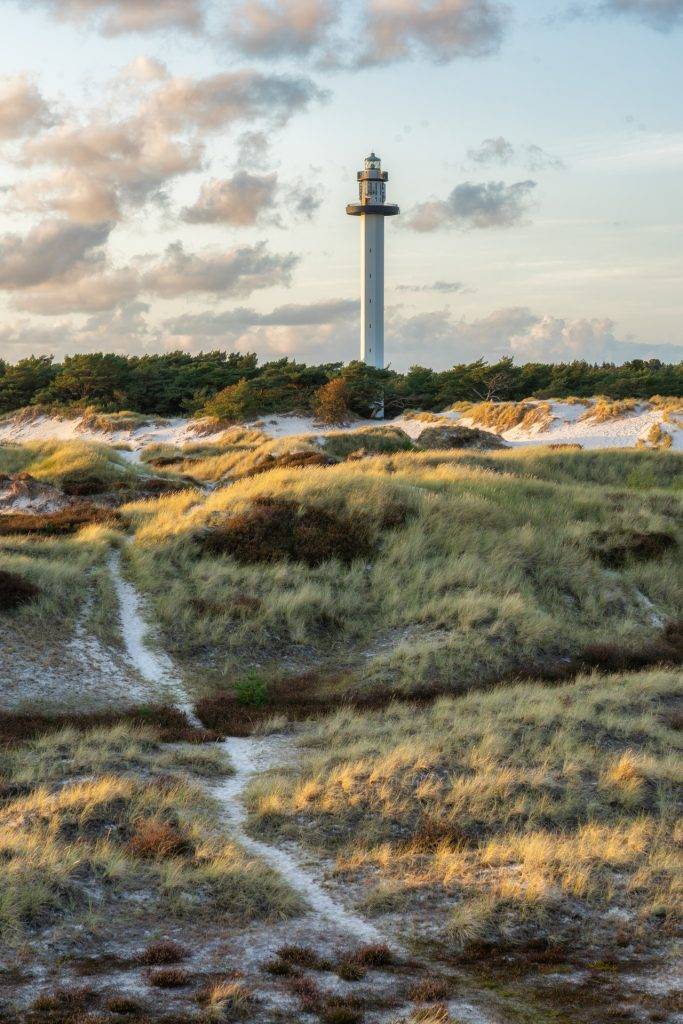 As our Bornholm visit was coming to an end, I knew there was still one place I needed to go. Near our vacation house, just below the Hammershus Castle, is an iconic rock called "The Camel Head". Again, the photography gods were with me. A colorful sunset at the exact right spot and powerful winds helped turn the drama knob to 10 on this image. 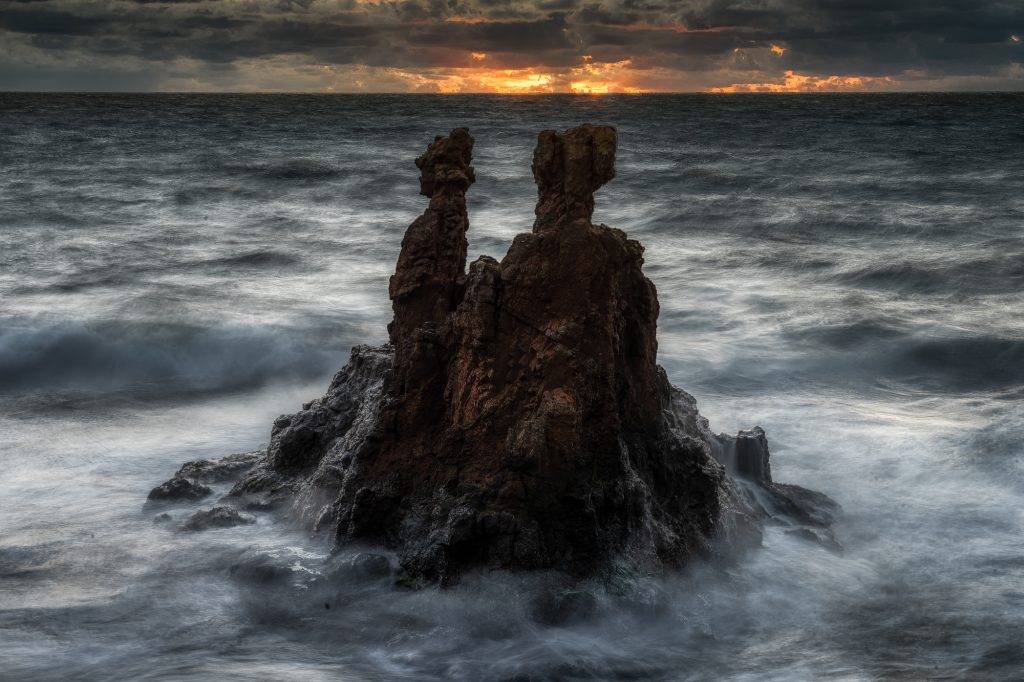 The next day I packed my camera away, and we left the island after an exciting few days. The above images are of course just a fraction of what I took. You will find a few more in the selection below. It's possible Bornholm is not about to be the new Isle of Skye on the landscape photography map, but no landscape photographer could go to Bornholm and not find it worth their time. Of that I'm certain. For my own part, I can say for sure that it won't be another 50 years before I go back to Bornholm. If I returned in 2021 it wouldn't be a moment too soon.

One comment on “Vancouver Island in the Baltic Sea: Landscape photography on Bornholm”