Spring is here so let's talk about... winter!

Here on the 56th latitude, the forests are on the verge of exploding into green and - I'm guessing - making the Garden of Eden look like your average city park. Spring is my favorite time of year, not just for photography but for being alive.

So let's talk about something completely different: winter! The season that has just ended. And let's start with this image... 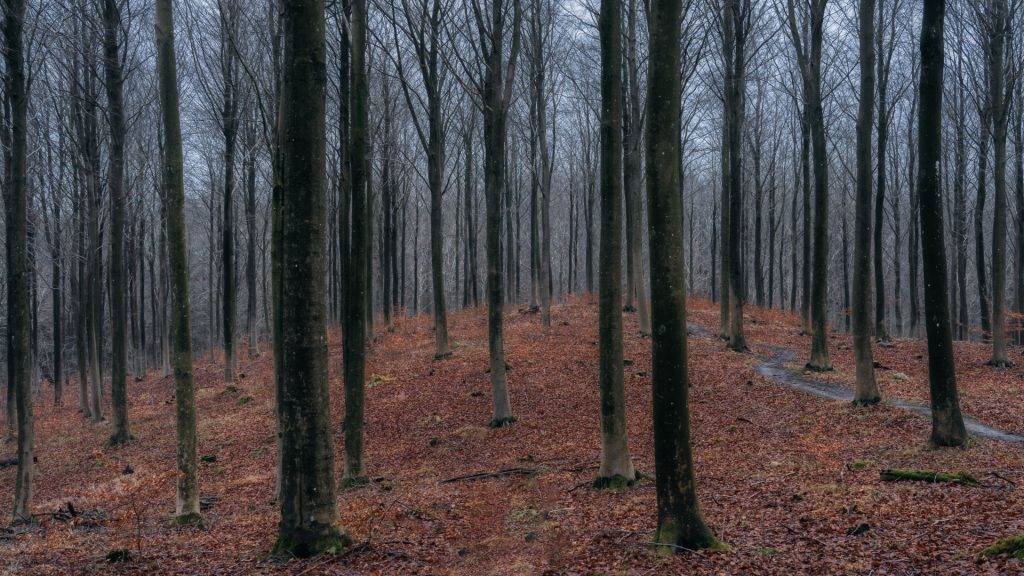 But then something happened. 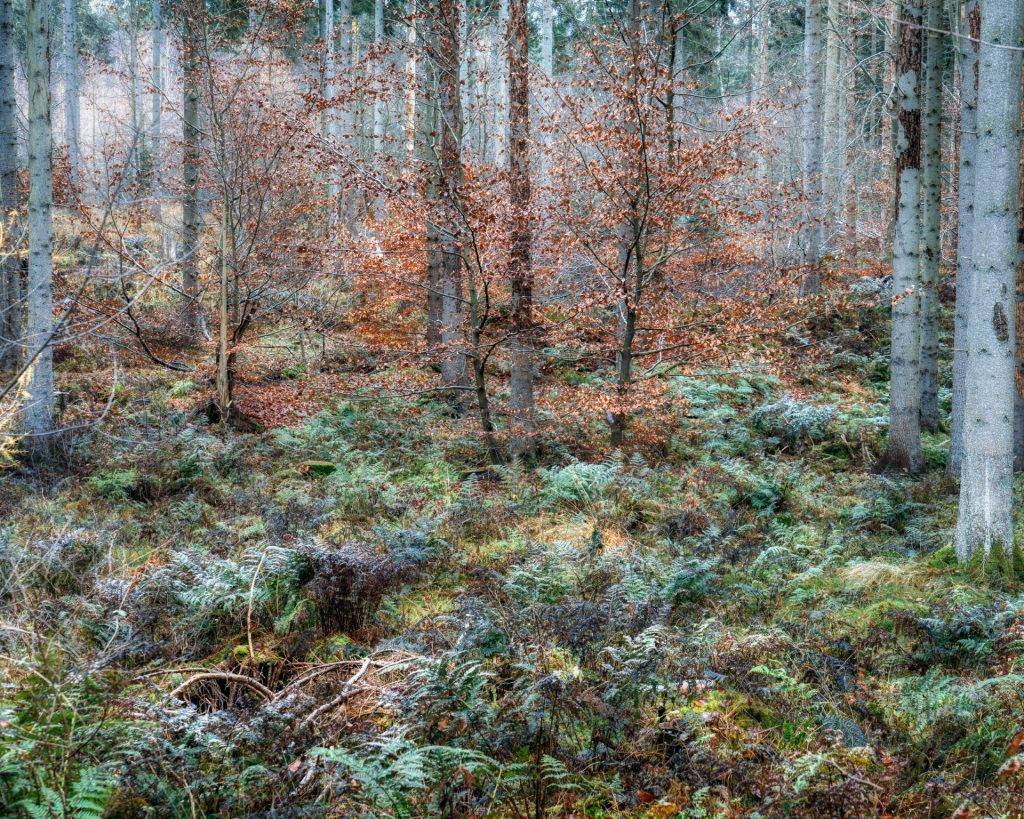 At first it was just a slight sprinkle of white, but that was enough to get me excited. To which you may say, "But isn't Denmark, like, almost at the North Pole? Don't you have snow most of the year?" And no, we don't. First of all, we are  nowhere near the North Pole. When you see pictures or film from Scandinavia with snow-covered landscapes, reindeer, and log cabins, those are from way up in Sweden, Finland or Norway. Denmark is much further south in the temperate zone, plus we are a very flat land with very little elevation and therefore relatively warm.

Still, even considering our placement on the map, the snow drought we've experienced in the last 10 years is new and is probably somehow connected to climate change. When I was a child (he said with a squeeky old man's voice), snow was much more common, and even in my adulthood, there have been years when my snow shovel has been on heavy active duty. Not so anymore so even a tiny bit of snow was a welcome change from the grayness.

Fast forward 1½ months where the above snow cover, which lasted less than a day, seemed to be all we would get. It looked like it would be another typical snowless winter. Until... 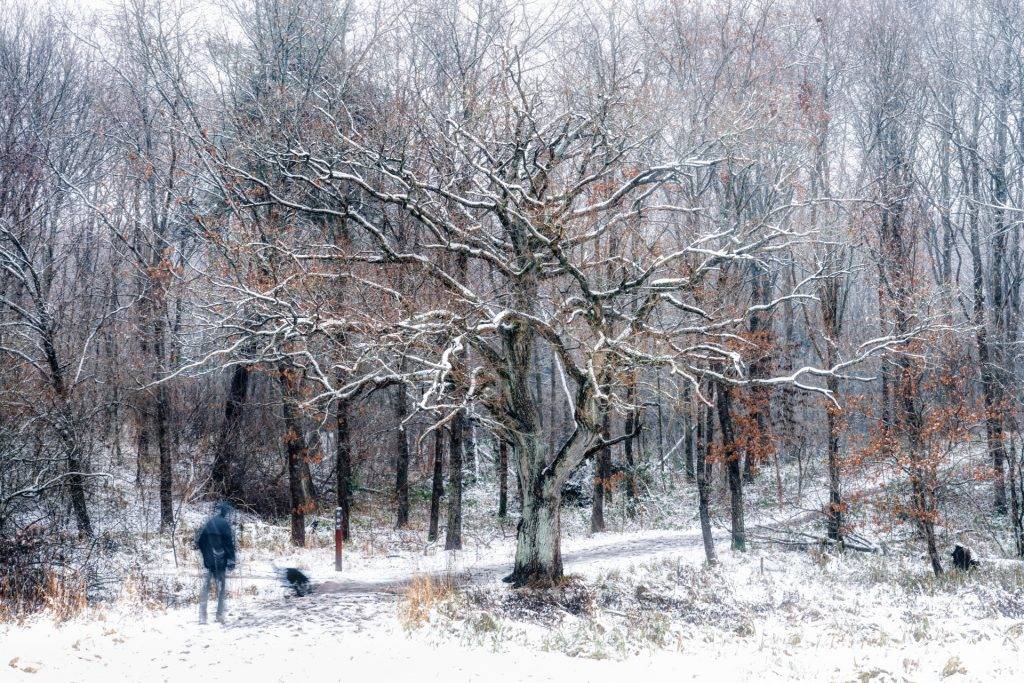 That day marked the beginning of a long stretch of snow and cold that would last a month or more. Mind you, it's not like we had several feet of snow. What you see in the image is about as deep as it would get, but it was enough to turn the world white, much to my photographer self's delight (my car driver self hates snow and ice).

The image shows one of my favorite trees (you can also see a couple of pictures of it here), old and steady as life and seasons come and go around it. It was actually snowing as I was taking the picture, but for some reason I couldn't for the life of me get the snow flakes to show, no matter what shutter speed I chose.

Winter culminated a few days later after another snowfall that made it possible to capture the below pictures on a magical afternoon in my local forest. Due to not having had the opportunity to do any real snow photography the whole time that photography has been my passion, I  quickly had to learn the basics about it. The number one rule is to shoot while the snow is still covering the tree branches. It makes a world of difference, but also limits your window by a lot. Another rule is, of course, to not over-expose the snow, which can be difficult to avoid, but I think I managed. Last but not least, capture the snow while it's falling. I failed that one for sure. 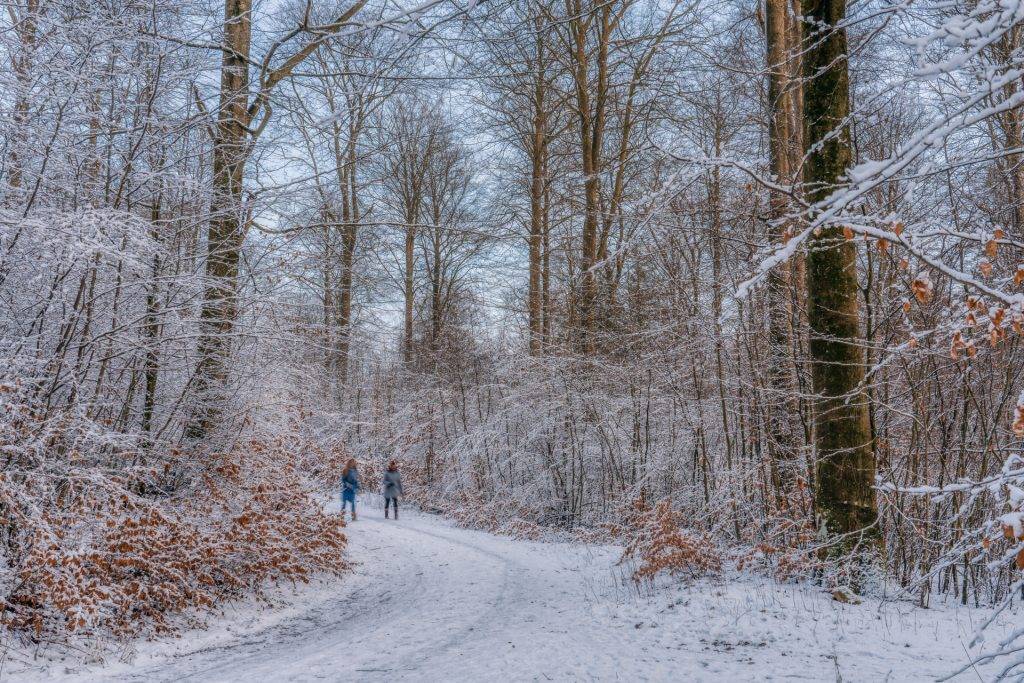 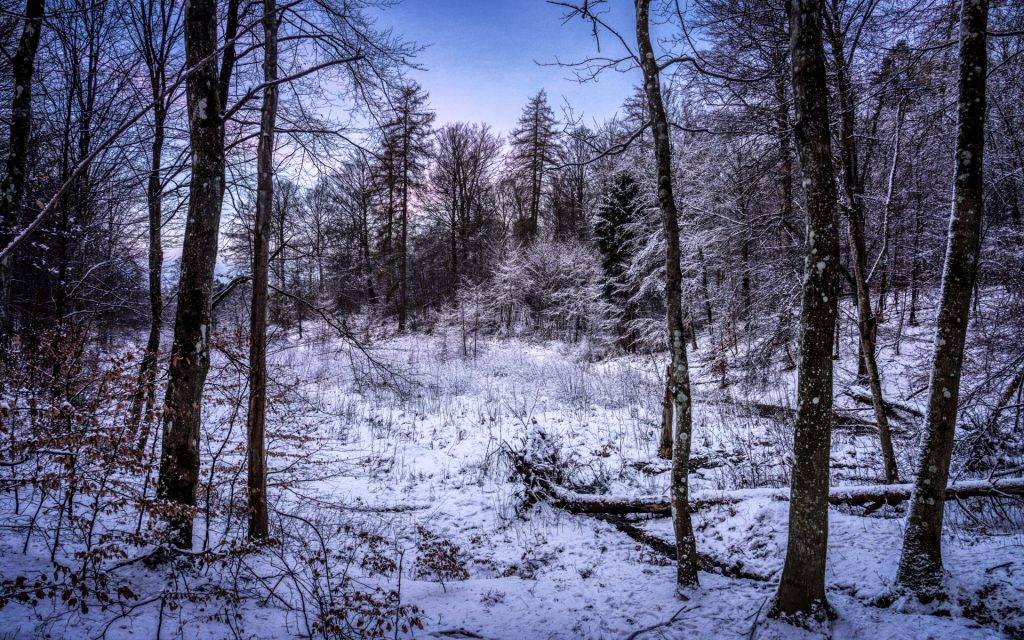 Winter photography doesn't just equal snow. By the middle of February most of the snow had melted, but the cold returned for another round. At first it didn't result in new snow, but instead we got a period of pretty harsh frost that turned lakes and even coastal waters to ice. I missed most of that, but did catch this interesting jigsaw puzzle of ice breaking up. 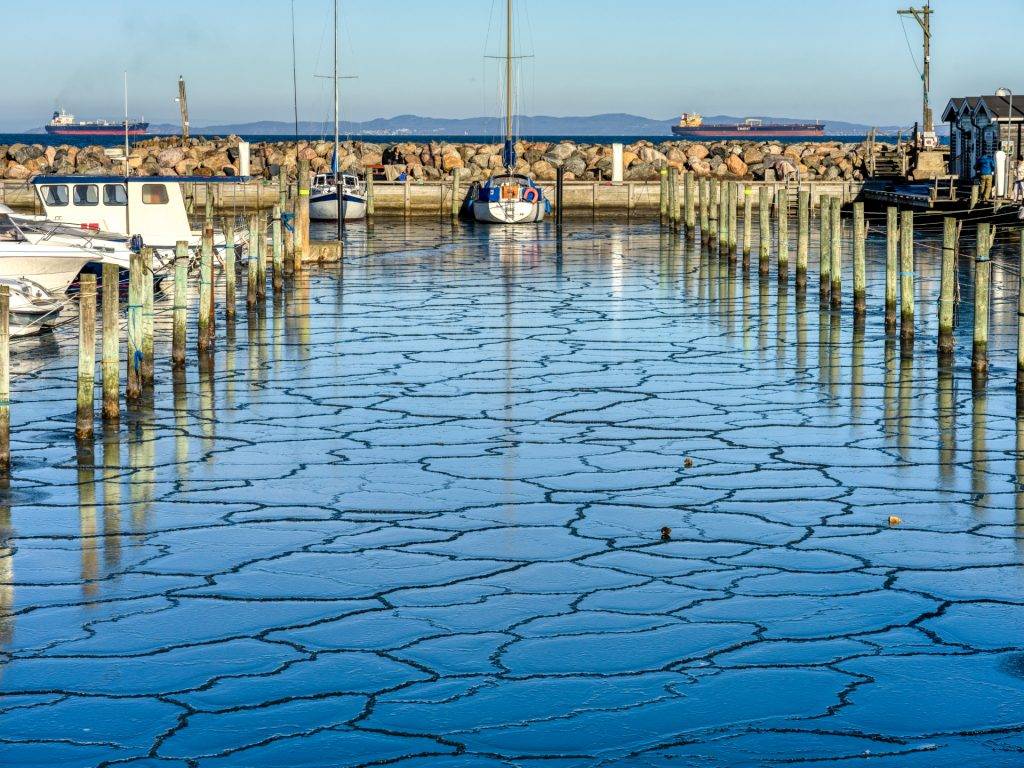 At the time of the above shot, I thought for sure that would be the last we would see of winter, but - true story - two days later, my local forest looked like this... 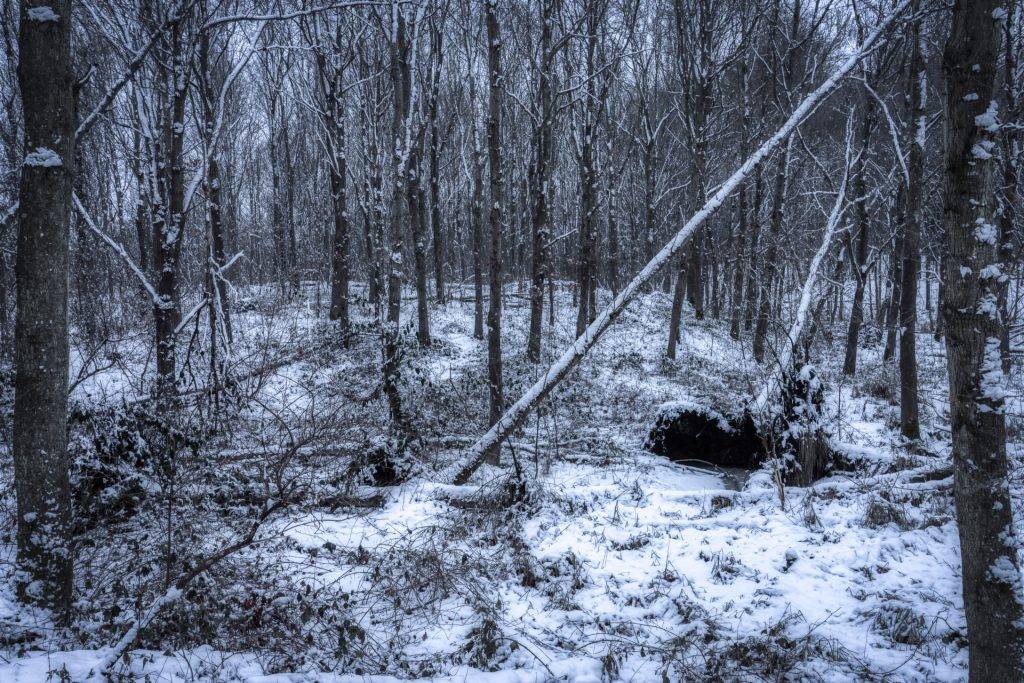 That picture was taken around dusk, and no, it's not black and white. This is what it looked like, revealing yet another one of winter's many faces.

However, I have saved the best for last. The below image was shot during a photo outing in the woods that, despite a bit of snow on the ground, was terribly uninspiring and - until I stumbled on the below scene - hardly yielded anything worth keeping. Then, accompanied by heavenly trumpets, this sight appeared before me and instantly made me drop to my knees... That is, in order to capture the scene from the low angle that would perfect the "door to spring", as I call it. 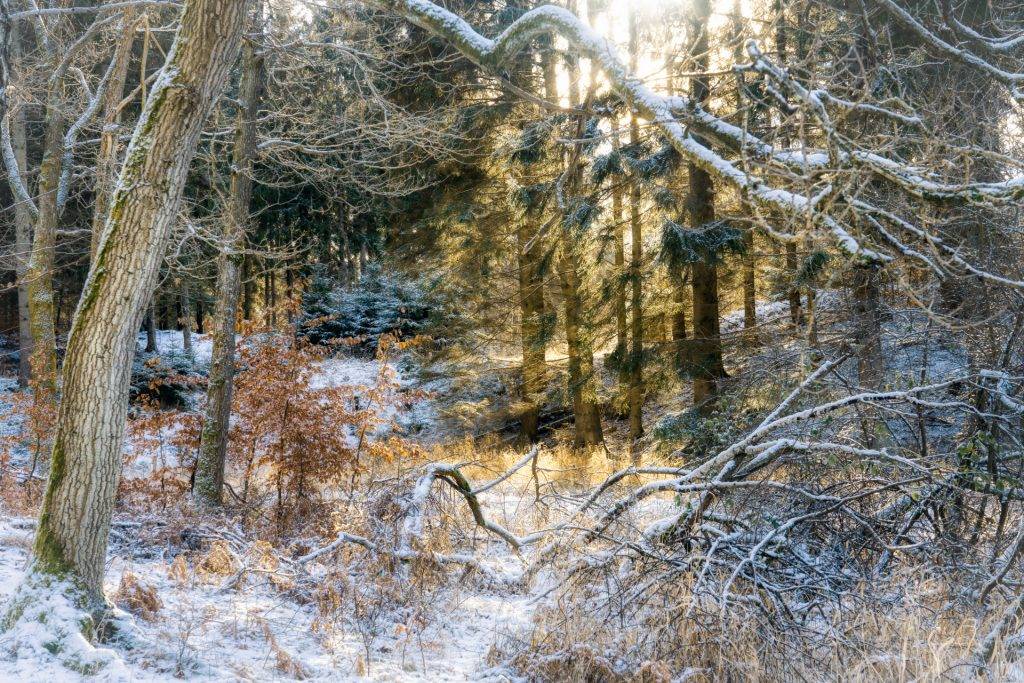 At the time "Door to Spring" was shot, spring was actually still 2½ months away, so the door closed again pretty quickly. Now, 2½ months later, I look back on a winter season that, I feel, for the first time since I got into photography, offered plenty of opportunities for real winter landscape photography. And real winter landscape photography, as we all know, contains plenty of that white stuff. Next winter I will most likely be back to shooting gray, dreary, snowless woodland and telling you how awesome it is, when you think of it, but you'll know that when I put my head on the pillow in the evening, I will be dreaming of snowclad trees, icy lakes, and snowflakes gently falling from the sky.

On the next episode.... Green, green leaves!