What a difference a different time of day means. Until now most of my spring photography has taken place in broad daylight in sunny and harsh light conditions. Today I went out as the sun was lowering in the sky and captured the spring leafs in magnificent ways. I love this time of year, when the bright green leafs are are coming out in little, apparently free-floating, bursts here and there and before they take over the forest completely. The scene today was my local forest where I have been a million times before, but I keep capturing new aspects of it. Spots that one day are hardly worth a glance turn into explosions of light and patterns and beauty, just because the season, the time of day, and the weather conditions are different.

April has been extremely bright and sunny and with hardly any rain. Today was no exception, and again it put a damper on my ability to create great photos. But as is almost always the case, I gradually got carried away and enjoyed myself tremendously. My first stop was Ulvedalen (Wolf Valley) in the middle of the forest, a location I have talked about before. The free-roaming horses were still there, but that wasn't the only thing that caught my attention. Looking through my long zoom lens, a surreal sight caught my eye: a man was sitting on a far hilltop, lotus position, hands spread out in meditation. Apparently he thought he was all alone. As I was watching him, the horses started to approach him. Soon they were so close to him, he could no longer focus. He got up and rode away on his bicycle.

The rest of my day went with standard forest photography, and a picture of the train that criss-cross the forest.

A bike ride without my real camera and with no intentions of taking pictures turned into a cell phone photography extravaganza when the forest I visited turned out to be quite photogenic. Especially when the sun started to set and the shadows grew long.

Another marathon day on the north coast. I started out in Tibirke Hills, which is the closest thing we come to mountains in my part of the world (and that's not saying much, because they are very far from mountains). You could see for miles, and though the light wasn't great it being in the middle of the day, I still managed to shoot a few images I was happy with. Later I walked and walked through the extensive forest and captured a selection of interesting forest scenes. The Tisvilde forest is strange and exciting and doesn't look like anything else that I know, and I absolutely love going there.

A crazy day on the north coast and in the neighboring forest. I have rarely walked so much in one day, but it was absolutely worth it. After a couple of attempts, I finally found one of the spots in the forest that has made it unique. The closeness to the beach has shaped the trees in strange curls and twists that make the place look like something out of the Inception movie. Still, it's not necessarily easy to photograph as your images easily become messy and confused. This is an incredible area that should be crowded with landscape photographers from all over the world, but I had it all to myself. And I will be back. I will soooo be back! 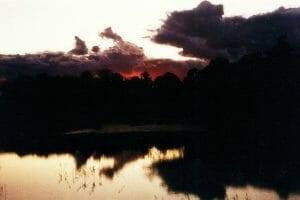